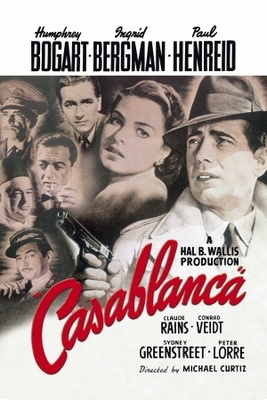 Themes of self-interest versus self-sacrifice run through all the major characters in the film. Rick struggles with his desire to be left alone and later to be with Ilsa, before putting the needs of the resistance movement above his own. Renault and Lazlo provide a contrast between the two extremes of this theme. Characters like Ugarte display the folly of self-interest, while one like the young refugee wife seeking Rick’s advice show the benefits of sacrifice. However, Ilsa exemplifies this theme more than any of the other characters, sacrificing her love for Rick not once, but twice, to help Lazlo continue his work.

In the same way, this theme drives the development of the plot. Ilsa’s self-sacrifice comes into conflict with Rick’s self-interest, setting up the tension between them and the plot developments that arise. Rick’s struggle back and forth between his own desires and his better instincts drive him in most every scene.

Casablanca acts as a broad symbol that reinforces this theme further. It’s painted as a place of pure self-interest, of crime and desperation, of people seeking their own desires. Lazlo then is a contrast to the city of Casablanca itself; he’s written as a symbol more so than a character. His pure self-sacrifice, both of his safety and later his happiness when he tries to send Ilsa to safety alone, is combined with his frequent speeches about the importance of the resistance cause. He’s the far extreme of the self-sacrifice spectrum. I said earlier that he and Renault act as foils to Rick, and while this is true in terms of Rick’s arc, Renault actually undergoes some development of his own. Casablanca serves as a better contrasting symbol to Lazlo in terms of the movie’s overall plot.

In terms of pacing, Casablanca has its struggles. The lengthy flashback at the start of Act 2 is jarring, and any sense of passing time in the movie is almost nonexistent. Days and nights bleed together, and the entire story could’ve taken place in two days or two weeks, it’s not clear.

Despite any of its flaws, Casablanca is a fantastic movie. It’s one you have to watch with great care; so much happens in each scene, conveyed through set dressings or gestures, that it’s easy to overlook important details on a first viewing.

It could have benefited from more concrete and distinct Acts, both in terms of its overall plot and Rick’s character arc itself. Both suffer from the weak and fuzzy pacing. However, Casablanca presents a fascinating world. There’s enough intrigue and mystery in Rick’s motivation that his weaker character development can be forgiven as a byproduct of hiding his true intentions. Alongside the tension created by this mystery, the fantastic and engaging dialog makes it hard not to be endeared to this movie. As a whole, Casablanca is a well told if flawed story about the importance of a cause and the casualties such a cause can create.