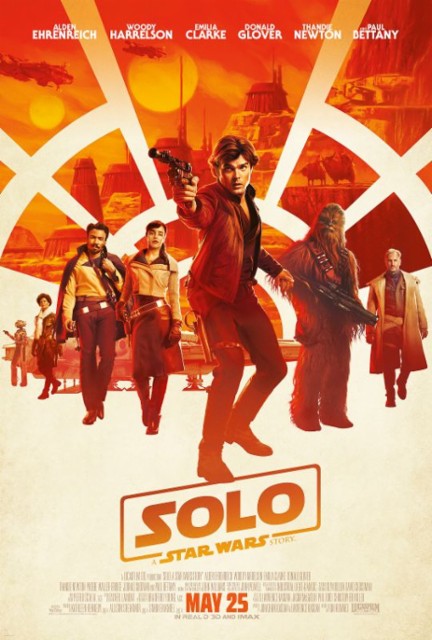 Theme: The power to be free.

Solo hammers its theme into every aspect of its characters with little variation. This isn’t a bad thing, but it compounds issues we will see later under pacing. As it stands, each major character struggles with a personal quest for power, but not power for its own sake. Power is a tool with which to gain freedom and control over one’s own life. Han seeks power to free Qi’ra, Qi’ra seeks power for security over her life, and Beckett seeks power to free himself from the syndicates. Even Vos seeks power by acquiring coaxium, which will elevate his syndicate above even the Empire. The Cloud Riders seek power to further the rebel cause, and L3-37 seeks power to end the enslavement of droids. Only Lando seems content with his place, and he is arguably the character with the most freedom from the start, just significant enough to matter but not enough to gain the attention of more dangerous forces.

Just like the characters, Solo’s plot is tied to quests for power. Each character seeks power and thus drives the plot forward based on these goals. Even the maguffin of the film, the coaxium, is raw hyperfuel, necessary to power space travel which is a sign of freedom.

As we touched on, one of the main symbols in Solo is the coaxium, which comes up at every major plot point as a symbol of both major themes. However other symbols are present, such as the repeated idea of the enslaved versus their owners. Han and Qi’ra are slaves on Corellia, Qi’ra a slave to Vos, droids are enslaved by organic life, the Wookies are slaves on Kessel. Even the Cloud Riders work to free the enslaved people on Savareen. Two smaller, but no less important symbols are the act of flight and gambling. Space travel is the key to Han and Qi’ra’s freedom at the start of the film, and Qi’ra has a taste of freedom while flying with Han. Alongside this, gambling provides an opportunity to gain power through wit. Han fails in this at the start of the film, but learns hard lessons throughout the movie and succeeds in the resolution. Solo uses a variety of repeated symbols to reinforce its theme.

When looking at the outline above, the issues with pacing may not stand out too much. The first half of the movie may seem heavy, but nothing excessive right? Right? In actuality, if you looked at the time stamps of these events, the structural Midpoint of Solo falls around the 1.5 hour mark, well past where it should. This means the entire second half of the movie from a structural standpoint, takes up only 30 minutes. I checked and rechecked my outline, but from a story structure standpoint the retreat from Kessel fits all the roles of the Midpoint. If we went by time stamps, Han would only just be meeting Lando at the Midpoint.

To compound this, none of the three primary characters undergo a complete character arc, meaning there is little resolution or catharsis to speak of. The audience is still reeling from the sudden jump in pace when the movie attempts a final scene in Lando’s hangout. As it stands, the story feels lopsided in its pacing, moving slowly and feeling bloated right until the end, at which point it zips along so quickly it may leave your head spinning.

While this movie uses its symbols well and keeps its theme applicable in all aspects of the story, the issues of pacing take a lot away from the broader journey. Han, Qi’ra, and Beckett could have benefitted from a longer run time during the Climax and Resolution, but because of the bloat and inefficient writing in the first half, these important character moments come off rushed. Han’s arc feels pointless, as it is the same arc he goes through at the start of a New Hope. Because of this movie’s nature as a prequel his development was limited. Ultimately, Solo is a film with tremendous potential that was hampered by poor balancing and the need to dovetail with the original Star Wars trilogy.