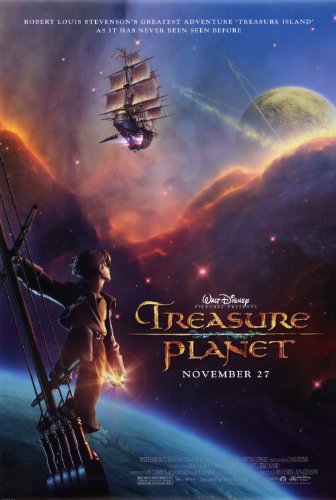 Theme: What’s the meaning of greatness?

Issues of greatness drive the actions of both Jim and Silver throughout the movie. Each of them is looking to achieve something, to be remembered, to be respected, or to be secure, and they do this by seeking Flint’s treasure. However, as their adventure progresses they come to realize that greatness can be found outside of piracy, treasure hunting, or self-serving exploits. By the end of the movie, both Jim and Silver come to see greatness as helping protect those they care about.

This means that the theme also drives much of the plot development in the movie. As each of the two main characters seek their own ideas of greatness they push the conflict forward. Jim seeks Treasure Planet to prove his worth and Silver not only attacks Jim’s inn, but personally attacks Jim, Amelia, and Delbert to secure Flint’s treasure. Only when they both realize that greatness isn’t about treasure do they overcome the conflict and save each other and the rest of the crew.

If you’ve started to notice a pattern then yes, you’re right! Treasure Planet is one of the primary symbols of greatness within the movie. From its mysterious, near mythological nature to the idealization of wealth it inspires, Treasure Planet is the symbol of both Jim and Silver’s idea of greatness. However, the broader experience of treasure hunting and space travel carry their own importance as symbols of Jim’s idea of greatness.

In terms of Pacing, Treasure Planet is a dense movie. An incredible amount happens in each scene between world building, character moments, and plot progress. There is little downtime in this movie, but just because the movie is dense doesn’t mean it’s pacing is overly rushed. Since the overall pace is high, major plot points just have to raise the stakes even higher, helping the pace ebb and flow correctly when looked at holistically.

Overall, Treasure Planet is a great movie that’s strongest point is by far its two main characters. The relationship between Jim and Silver is moving, emotional, and the driving force behind everything this movie does right. However, that’s not its only strong suit. It uses foreshadowing and dramatic irony exceptionally well. For example, Scroop’s murder of Mr. Arrow is perfectly mirrored in Scroop’s own death, and Jim’s opening scene in the industrial complex is called on in the Climax, highlighting how much he’s grown and progressed through the film.

In such a dense movie, there’s no space for fluff, and each scene pulls its weight and then some. There is nothing that could be cut from this film without hurting the overall story. Unfortunately, with that comes a problem. Treasure Planet would likely have benefited from a longer run time, giving each scene a bit more breathing room for the audience to process what just happened. However, this is a minor complaint. In a movie as action packed and fast paced as this, it’s refreshing to see each action scene mean something in the overall plot, instead of being added to meet an explosion quota.

At the end of the day, I’d highly recommend Treasure Planet both as an enjoyable movie to watch and as a great study on how to maximize the impact of each scene and plot point in your story; especially if you have limited pages to tell your story with.