An Introduction to the Three Act Structure

Despite the plethora of stories that use structure in exciting ways, popular perception seems to be that structure stifles your creativity and creates cookie-cutter storytelling. I bought into this belief for a long time, holding firm that if I wrote my stories without concern for these “restrictive” ideas, I could produce great works of fiction. Unfortunately, what I ended up doing was getting lost—a lot!

My stories never found a solid conclusion and never gave the reader—or myself—any payoff. Worst of all, I didn’t understand what I was doing wrong. I had believed the Three Act Structure would hurt my writing, but once I stepped back, I realized it was what I needed the most.

This article is part of a series of posts about the Three Act Structure, as well as how to put this story structure to work as you write your novel. If you’d like to check out the rest of the series, you can do so here: The Complete Story Structure Series

The Universal Appeal of the Three Act Structure 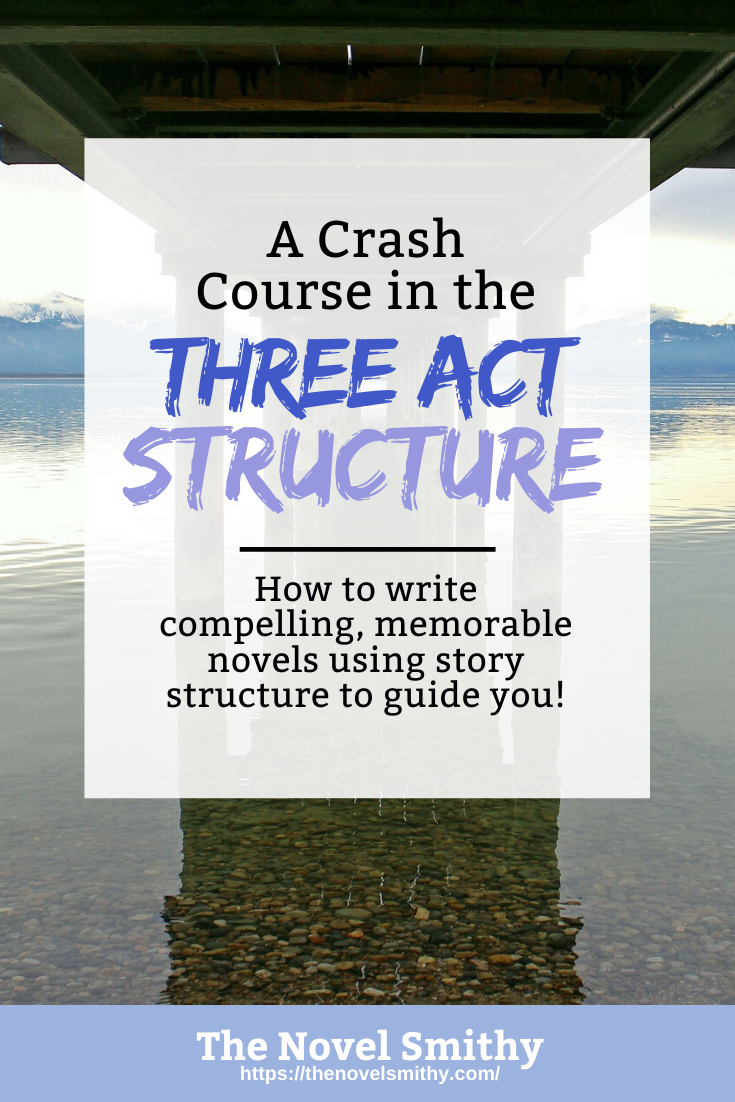 There’s a reason the Three Act Structure is nearly universal, seen in everything from Hollywood blockbusters to indie films, bestselling novels, and popular short stories.

This reference to acts comes from its origins in play writing, where it was first outlined by Aristotle in his book, Poetics. He observed how Greek plays used common story beats to engage and entertain their audiences, while still passing on their own unique lessons.

Each act has a role to play in setting up what follows, coming together in a Climax that feels resonate, impactful, and cathartic—a term we’ll revisit later in the article.

Ultimately, by learning the rules of The Three Act Structure, you equip yourself with the knowledge to break them in fascinating ways—but without this foundation, it’s easy to fall into common writing traps, creating stories that go nowhere and lack any real payoff.

This article is here to give you an introduction to the Three Act Structure and an understanding of the basics I so desperately needed all those years ago. I’ll cover what comprises this structure—using Star Wars IV: A New Hope as an example—and talk about how and why you’ll want to keep it in mind as you write.

Now, let’s begin our crash course on structuring a novel, courtesy of The Three Act Structure!

What Is the Three Act Structure?

Act 1 comprises roughly the first quarter of your novel, and fulfills the important function of setting up your story’s world and characters. Additionally, it’s also charged with asking the main question your story seeks to answer.

All together, Act 1 built on four key plot points, with time to develop your setting and conflict in between. When combined, these catch your reader’s interest and give them the tools to understand the basics of your story.

Most importantly, you’ll want to introduce the core question of your story’s conflict.

Will the guy marry his boyfriend? Will the dragon eat Bilbo? Will peace return to the galaxy? Whatever it is, it needs to be woven into the Hook, the Inciting Event, the Key Event, and the First Plot Point.

The Hook: This is how you get your reader’s attention when they first begin your story. Introduce them to who your protagonist is and what makes their world unique, and encourage them to start asking questions about your story’s conflict.

The Key Event: Here is where your protagonist will become firmly involved in the conflict—but don’t worry. There is still plenty of time for them to prepare for their quest, both mentally and physically. They may still need convincing to start their journey at all.

The First Plot Point: This is where your story truly begins. Your protagonist is prepared and now makes the final decision to engage with the plot and your story’s conflict. There is no turning back.

Once your story has been introduced by Act 1, you can enter the meat of your story—Act 2.

This will form the bulk of your page count at around 50%, and will consist of a series of tests and trials that see your protagonist grow and change, preparing them for the Climax and fleshing out the stakes of the conflict at hand. Here you can explore character arcs, subplots, secrets, and foreshadowing that will make your story more exciting and compelling!

Of course, because it’s so large, it’s easy to be overwhelmed by Act 2.

To help you move past this overwhelm, think of it in two parts, separated by the Midpoint. The first half of Act 2 sees your character reacting to the events of the plot, being driven forward by the outside forces of their new world. On the other hand, the second half sees them finally begin driving the plot forward. They’ve gained new skills and goals at the Midpoint, allowing them to take a more active role in their own story.

Still, not everything is perfect for them—Act 2 closes with the Third Plot Point, your character’s darkest moment along their journey.

The First Pinch Point: If you haven’t introduced your antagonist, now is the time to do so. If you have, remind readers why they should take them seriously. Reinforce the stakes of the conflict you established in Act 1 and why this conflict matters.

The Second Pinch Point: A follow up from the First Pinch Point. In the afterglow of the Midpoint, remind your protagonist and your readers why they need to fear the antagonist. They haven’t overcome the conflict just yet!

The Third Plot Point: Your protagonist’s darkest moment. As far as they can tell, the antagonist has won. This sets up the Climax, where they must prove their ability to overcome the conflict against all odds. The pace of your story speeds up from here on out, leading to a tense Climactic Moment.

Act 3 begins immediately after your Third Plot Point and marks a dark and tense time for your character. This is where you’ll find the Climax of your story, or the final confrontation between your protagonist and antagonist, but it’s also where the loose threads of your story must come together. Any foreshadowing or subplots you set up in Act 1 and 2 are tied off here.

Most importantly, Act 3 is the culmination of your protagonist’s arc, as well as any other major character arcs in your story. All of the skills and knowledge they gained during Act 2 will be put to the test here.

Fortunately, Act 3 isn’t all doom and gloom, as it wraps up with the Resolution.

This lets Act 3 pull double duty—it has the highest point of tension and the quickest pacing balanced by the greatest moment of release, also called catharsis.

Your goal as a writer is to provide your reader with this moment of catharsis at the Resolution of your story, a moment of peace and reflection where they see the effects of the conflict on the world and characters they’ve grown to love. This may be bittersweet or it may be joyous, but it should produce the same effect of emotional release that deeply impacts your reader.

The Climax: Time to ramp up the tension. Your protagonist and antagonist are on a crash course and the reader is racing towards the finale alongside them. Begin setting up the Climactic Moment, which comes soon.

The Climactic Moment: This is the decisive moment within your Climax. Will the protagonist succeed or succumb to the antagonist? Here you must answer the question you presented in Act 1. Will he get the girl? Will she get the job? Will Unicorns return to Earth? Whatever it may be, answer it here.

The Resolution: Time to breathe a sigh of relief with your readers and protagonist—the conflict has been resolved. Now comes the task of figuring out how their lives will continue from here. Will they begin to recover from their journey? They may return home, but their world will never be the same. There may even be hints of a sequel here!

The Three Act Structure in Action

Star Wars, a franchise that has spawned movies of such tremendous heights as The Empire Strikes Back and such disappointing lows as the The Last Jedi, all started with A New Hope.

This movie created the foundation for all that would come after it, in many ways because of how well it used The Three Act Structure. So, let’s unpack at how Luke Skywalker’s debut story works within the structure we’ve been looking at so far!

The Power of the Three Act Structure

By using story structure, you don’t confine yourself to a formulaic story. Instead, you provide your readers with cohesion, emotional payoff, and tight pacing that keeps them engaged for the entire ride. Because structure manifests in so many aspects of the writing process, it’s a fantastic tool for ensuring every beat of your story hits home.

Of course, many people worry that using structure will damage their creativity, and I understand that fear. The way creative writing is taught makes it seem like The Three Act Structure is an uncompromising dogma that forces you to follow its whims exactly, but that’s far from the truth.

The key is in how you use it.

If your story lacks a Second Pinch Point, but your beta readers don’t feel the story suffers, great! Don’t feel pressured to force your story into a structure if it’s working as is. On the other hand, if your story is sagging in the middle and you can’t figure out why, The Three Act Structure is there to provide answers. In that regard, it’s no different from outlining.

Ultimately, if you understand structure you have a road map for your story, preventing you from falling into the aimless wanderings I suffered from when I began writing. With wise use of The Three Act Structure, you’ll hopefully be a more productive and happy writer as a result! 🙂

How does story structure influence your novel? Let me know in the comments!

Thoughts on An Introduction to the Three Act Structure