How to Outline Without Sacrificing Your Creativity

Outlining can get a bad rap in the writing world…

Yet, in my personal experience, nothing is more comforting than having a solid outline to guide you as you write your novel.

Unfortunately, many people remember outlines as the rigid bullet point lists from their school days. In reality though, outlines are simply a road map for your story—and they’re just as useful for Pantsers as they are for Plotters! That’s because your outline should mesh with your individual style of writing, becoming as in-depth or as sparse as you need.

The Basics of an Outline 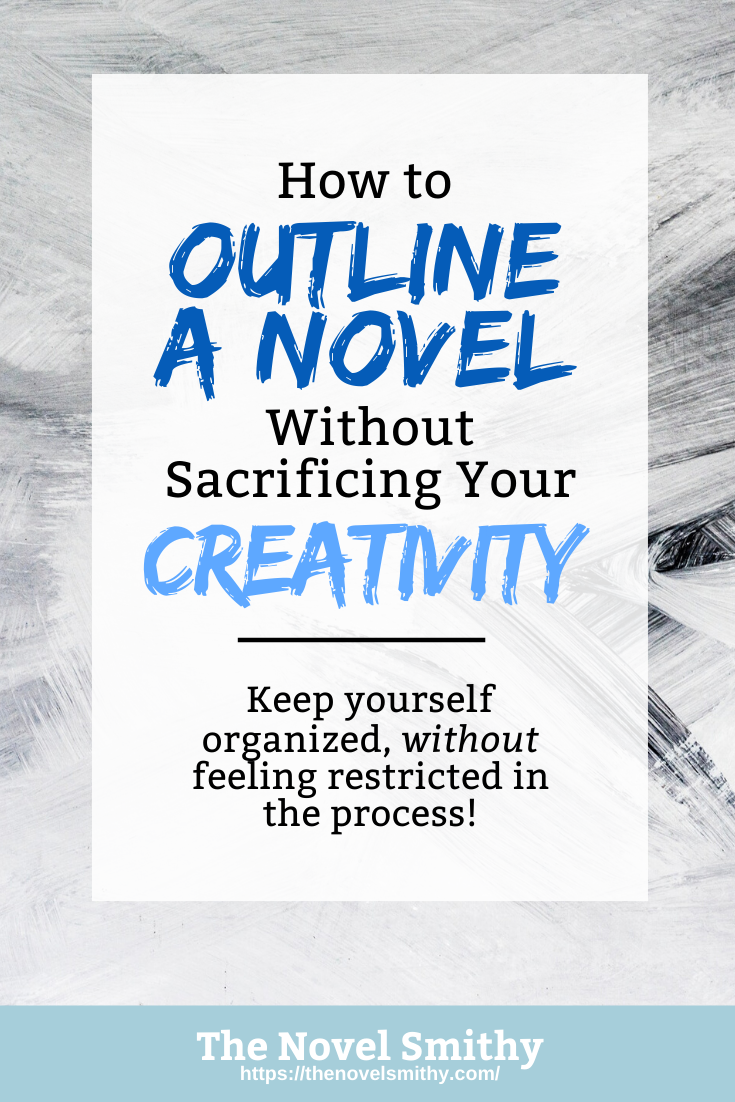 Many writers worry that an outline will “restrict their creativity.”

Yet, in reality, an outline is only there to show you the main path to your destination. When you get turned around in a cul-de-sac miles from your central highway, this handy map will guide you back to your story’s core. You aren’t preventing yourself from exploring, but rather equipping yourself with a gentle, guiding hand when those explorations go awry.

So how do you create an outline?

This largely depends on your own personal style, but in general, your outline will need to cover three main events in your novel’s plot:

Everything after that is extra, meaning your outline can be as detailed or sparse as you want! You might choose to flesh out your characters’ arcs, or to fully outline each scene of your story—the final form of your outline is really up to you.

For now, let’s look at these three elements.

The First Plot Point is one of the first major events in the Three Act Structure, and helps form the backbone of your plot. It’s there to show you what gets the action moving for your story’s world, and to outline how your protagonist gets involved with it.

Let’s use Disney’s Mulan as an example:

The First Plot Point of Mulan occurs when Mulan sneaks away from home to join the army and protect her father. She feels unwanted and powerless in her normal life, and this is her way of making herself valuable to her family—even if it means endangering her own life.

Notice how this isn’t particularly specific, and that exactly how she sneaks into the army or escapes from home isn’t clear. That’s ok, because this basic outline is only meant to create the rough foundation you’ll use to write your novel. Instead of going into exhaustive detail here, you’ve simply established what sets the story in motion, without any excess.

The Midpoint is the next major element of this trio.

Interestingly, even in a basic outline, the Midpoint looks much the same as it would in a more fully realized outline. That’s because this Midpoint is the tent pole that keeps your story from sagging in the middle—it provides a turning point for your plot, for your character’s goals, and for their inner development. Here they’ll gain news skills, knowledge, and confidence, all of which will be put to the test throughout the rest of their story.

This means there’s less flexibility when outlining your Midpoint, even in a basic outline.

Still, the amount of detail you provide for this event can vary greatly. In Mulan’s case, her Midpoint comes when she proves herself to her new friends by using her brains to climb up the pole and retrieve the arrow at the top.

You can write this in a few ways, depending on what you want specified. The Midpoint can be far more detailed then the description above, or it can be as simple as: Mulan succeeds in a major test thanks to her intellect, and proves her worth to her new friends.

This leaves a lot of room for flexibility and for different conflicts to develop, while still making sure you have some pivotal event holding up your story’s middle!

Lastly, we come to the Climax.

Of all the plot points we’ve discussed, this is the one you’re likely the most familiar with, simply because it’s so iconic. The Climax is the final showdown of your story where you test your protagonist’s new skills, knowledge, and alliances and resolve your story’s overall conflict.

Because of that, you should always be working towards your Climax as you write.

It’s there to tie all the themes and developments of the preceding 200+ pages together and provide a cohesive and satisfying story for your readers. Without reminding yourself of it as you write, it’s far too easy to become sidetracked. Keeping with our earlier map analogy, the Climax is the Thanksgiving dinner you need to get to on time or risk facing your grandmother’s disappointed wrath!

In Mulan, you can write the Climax as follows: the leader of the Huns kidnaps the Emperor, and Mulan brings herself honor by using her intellect and new allies to defeat the Hun leader and save the Emperor.

Of all the three points we’ve discussed, the Climax is where you should dedicate by far the most detail, because it pays dividends to work through the events of your Climax before you start writing. Without knowing your destination ahead of time, it’s hard to achieve a satisfying conclusion, meaning lots of rewrites and complicated edits in later drafts.

So, all of this is well and good, but what if you want to expand on your outline and turn it into something a bit more in-depth?

Well, beyond delving into different schools of story structure and the finer points of character development, there are three other elements you can incorporate into your outline to help guide your writing process. These are most helpful in the second draft phase, but depending on how detailed you make your starting outline, you can use them for your first draft too!

To start, you’ll want to think of this expanded outline as a log of your story’s progress.

As you write, pause throughout your story and make brief notes in your outline. Cover what’s happening in the plot and what your characters are learning or failing to learn along the way.

By the time you’ve finished your first draft—complete with all the pantsing or plotting you’d like—you should have an outline that is a complete log of how you’ve written your story thus far. This should be brief, only a few pages at most. From there you can monitor key elements of your story and fix any problems you find much more easily than if you had to dig through your entire first draft without a guide.

For the sake of consistency, let’s continue with our example from Mulan:

Now imagine this was how the movie progressed. It feels a little sparse doesn’t it? That’s because, in this iteration, it has a serious flaw in its pacing.

The series of tests Mulan goes through—covered in a catchy musical number; thanks Disney—are missing, and the jump from her self-doubt when she enters the army to her confidence retrieving the arrow feels shallow. Not only that, but we’re also missing key scenes that set up the motivations of other characters, as well as important plot elements.

In your own story, this would work the same way.

As you go over your expanded outline, watch for places where there’s a sudden jump in either the plot or your character’s internal development. This means you need to flesh out this part of your story.

Frantic pacing happens when you don’t give your story the necessary time to breathe because you are jumping from action to action. Take a moment for your characters to stop and reflect on their journey thus far or to be tested in some other way. While a quicker pace is natural preceding your Climax, it usually isn’t advisable for the entirety of your story.

Similar to how too quick of a pace is a problem, too slow is just as problematic, and just as fixable! No matter if you’re writing a novella or a three book epic like The Lord of the Rings, your audience needs consistent bits of action that meaningfully progress the story, both for the plot and your characters.

What this all comes down to scene structure—by following scene-writing best practices, you’ll ensure your pacing stays consistent and engaging for your reader. Read more on that here.

Character arcs are another key part of any well-written story, and should form the backbone of the internal journey of your story. Much like with pacing, you can reference the development of your main character by looking at your expanded outline.

Let’s turn our attention back to the outline of Mulan we used to discuss pacing.

In the same way the missing scenes disrupted the pacing prior to the Midpoint, Mulan’s character arc was disturbed too. Instead of a compelling journey where she proves herself through her cleverness, you get a huge jump that makes her newfound confidence feel undeserved. At the Climax her achievements feel even hollower because we, the audience, never got to see her struggle to earn her new success.

Your story is no different. Look carefully at the notes you made about your character’s internal development:

While not exhaustive, these questions are a great place to start when making sure your characters experience a meaningful journey by the end of your story.

Last but not least is the dreaded plot hole. The bane of many an ambitious world builder, they can seem almost impossible to root out of your story. However, while it’s difficult to hunt down every pin-sized plot hole, your expanded outline is a great tool to catch many of the plot holes in your own story.

You know the drill by now!

Look through your newly expanded outline and make a note anywhere something doesn’t jive with the rules you’ve decided on for your story. Are there places where a character is mysteriously—or accidentally—in two places at once, or even where a character makes an inexplicable personality change?

Once you have these inconsistencies marked, you can then make a informed decision on if they’re something you’d prefer to keep, or if they truly are holes in need of patching. You can even color code different plot inconsistencies, to make it even easier to analyze your story!

The Real Value of an Outline

So, let’s put it to rest once and for all—outlining can be valuable for all types of writers!

From Pantsers to Plotters, your outline can be as in depth or as basic as you need it to be, but I hope the best practices we’ve laid out above help you create an outline that fits your needs. The three-legged basic outline is a great starting place, and the expanded version is the perfect way to cut down on lengthy edits in later drafts.

From there, you can take your outline in a whole variety of directions.

Personally, I like to create expansive, in-depth outlines—basically writing my first draft in outline form. You may prefer to stick with the trimmed down basic outline. Ultimately, regardless of the path you choose, by making a map of your story early on you’ll always know where you’re headed and where you’ve been, making it that much easier to tell a compelling story right from the start!

Are you a Pantser or a Plotter? Let me know in the comments!

Thoughts on How to Outline Without Sacrificing Your Creativity