4 Ways to Study Storytelling Through Movies

Not everyone has time to read a novel each week.

Despite how important reading is for improving our storytelling skills, reading often has to take a backseat, simply because of how busy our lives are—which presents a difficult question. How, on top of work and a social life, do you find the time to hone your writing craft?

You could read books on storytelling or blogs like this one, but those present many of the same problems as novels—often, there just isn’t enough time in the day. So, what’s another solution? The answer is movies.

Why Movies Make the Perfect Teacher 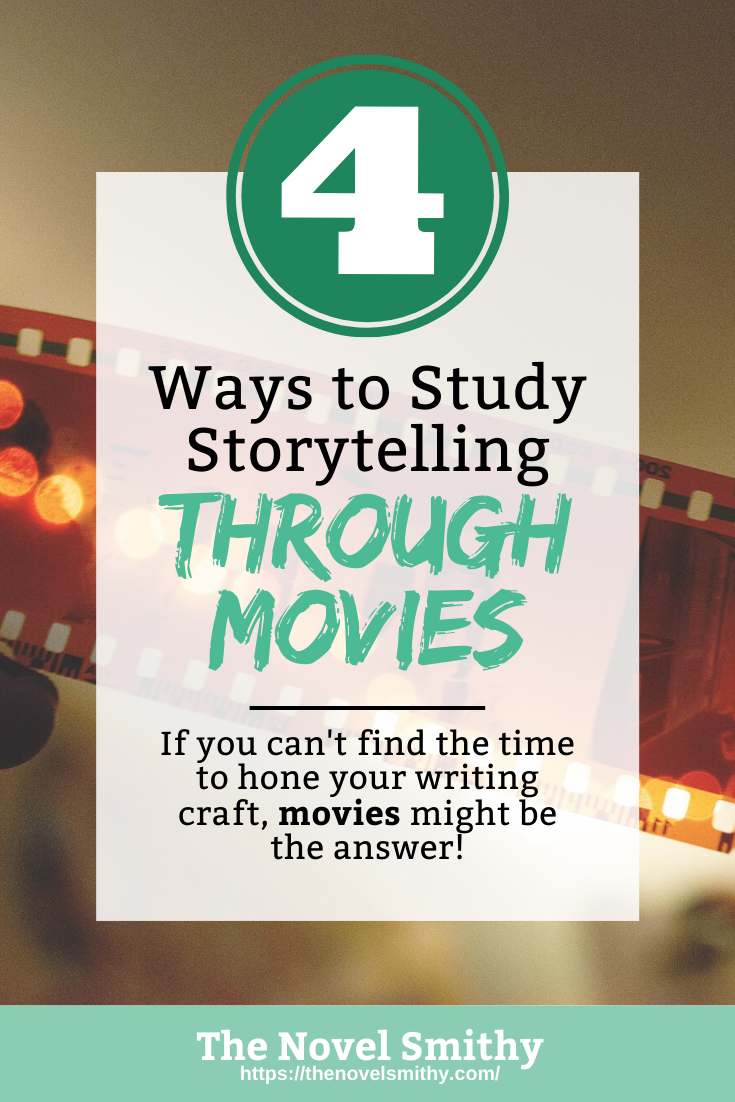 Why should you learn storytelling from movies instead of books?

Well, for starters, I’m not saying books have no place in your writing arsenal. Books on the writing craft and expertly written novels will always be a tried and true method for learning the art of storytelling. Instead, I like to think of movies as a supplement to those things.

Better yet, movies are something writers can easily fit into their busy lives!

Most novelists are interested in the written word—however, it can take you a week or more to read a novel in its entirety, especially if you’re stopping to pick apart its structure. In contrast, you can curl up on the couch and finish a movie in an afternoon.

Beyond the time commitment, movies are a more condensed story form, readily available and easy to absorb for recall later. A good movie doesn’t have a lot of fluff, meaning its story beats stand out that much more clearly. Essentially, if you want to be efficient with your limited study time, movies are the way to go!

(As a bonus, this site also hosts the Movie Structure Archives, a collection of movies explained and analyzed using the exact structure you need for studying them!)

What You Can Learn From Movies

There are four topics to look for when studying movies:

To elaborate on these four topics, I’ll be using a movie from the Archives. Head on over to see a full break down of How to Train Your Dragon, which we’ll be discussing snippets of below—or better yet, watch the movie before returning to this article!

When first learning about storytelling most of us study the Three Act Structure, but these plot points can be difficult to visualize in our own stories. With so much else going on between your plot and characters, there can be a lot of fluff camouflaging these pivotal moments.

In contrast, movies are restricted by their run-time, meaning their plot points have less fluff surrounding them.

In How to Train Your Dragon, you can clearly see the Three Act Structure at work. Hiccup’s Second Act begins with the start of Dragon Training, both in the arena and in his personal training with Toothless. Hiccup’s Midpoint is an exhilarating flying scene where he finally unlocks Toothless’s secrets, and his Climax begins when he and the other kids arrive at the Dragon’s Nest.

All of these plot points are condensed into a two hour experience, making them perfect for studying! So, when watching movies for yourself, keep these major scenes in the back of your mind. Afterwards, think about the Three Act Structure. Write a brief outline and plug these scenes in. If you get stuck on how a certain scene fits, reference books on structure or blog posts like the ones on this site to help you along.

This is a jigsaw puzzle, one you get better at the more you solve it.

As you figure out how each individual movie fits within the Three Act Structure, you’ll begin seeing this structure more clearly in your own work. What’s happening is that you’re internalizing the look and sound of these structural moments, as well as how they relate to one another, something you can turn around and apply to your own stories later on!

Just like with structure, a good movie will have a full character arc condensed into two hours.

Novels need to do the same, but the arc in a novel takes much longer, going through multiple periods of improvement and decay before reaching a conclusion. Movies need more linear arcs, with the character having a clear starting point, a period of struggles followed by improvement, and a final climactic test that forces them to overcome their character flaw.

Hiccup follows this character arc to a T.

He starts out struggling to fit the aggressive Viking mold, torn between wanting his father’s approval and being incapable of meeting his expectations. After meeting and befriending Toothless, however, Hiccup’s realizes that there’s another way to live a good life.

Meanwhile, he continues to hide his true self until his father discovers him. Hiccup refuses to give up on Toothless and by doing so, he heals not only himself but the entire village of Berk, which can finally live without fear of a dragon attack.

To study characters in movies, you’ll want to reference the scenes you noted earlier.

This should give you a good picture of how the main character’s arc was formed. Then, as you piece together a variety of character arcs you’ll see how your own characters undergo similar patterns of change—or fail to change—letting you use this knowledge to strengthen their arcs.

As with the previous topics, the all elusive “theme” tends to be much clearer in movies, again because of the abbreviated run-time. While novels can explore many facets of a single theme or multiple interrelated themes, movies tend to be laser focused on just one.

For a beginner learning how to weave theme into their own stories, this clear focus makes an otherwise difficult topic much more understandable.

How to Train Your Dragon deals with the theme of understanding difference. Hiccup devalues himself because he is different, yet by learning to understand Toothless, so too does Hiccup begin to appreciate himself. By proving that dragons aren’t evil, Hiccup also demands that his community respect these differences, and by doing so he heals both himself and his tribe.

Of course, theme can be hard to identify, as it often deals with nebulous moral issues.

These aren’t blatantly stated, but are instead woven through the story organically. While this is all well and good, it does make understanding theme more difficult! Thankfully, once you’ve broken down a movie’s structure and characters, you should start to have a much better idea of its theme.

Theme is often tied up with the protagonist’s character arc and their internal struggle. However, it can also be woven into their relationships with other characters or with the overarching plot. Apply this same deductive process within your own stories and you’ll find theme becomes much easier to identify.

Our final topic is another nebulous one, but one you can’t ignore!

That’s because pacing is what keeps your readers reading.

A good pace ebbs and flows, giving the audience moments of action coupled with periods of rest and reflection. All of this ramps up into the Climax, creating a feeling of intensity followed by catharsis once the conflict is resolved. As with our previous three topics, pacing is easier to identify in a movie, especially if you’ve already identified its structure.

How to Train Your Dragon keeps its pacing perfectly metered, giving the audience just enough action to keep them engaged and to make the stakes of Hiccup’s journey feel real. You see this clearly in Act 2, where the movie switches between Hiccup’s struggles in Dragon Training and his attempts to train Toothless. When one is difficult or dangerous, the other will be more comedic, and vice versa.

This builds into the Climax, where the tone takes a darker turn and where Hiccup gets no breathing room between key moments. The stakes feel real, and the emotional release at the Resolution is all the more appreciated because the pacing was perfectly on point.

Fortunately, once you’ve figured out structure, pacing should feel like a breeze!

Of course, different stories require different pacing, but these questions can work as a guide.

Pacing is something you feel in your bones as you watch a movie. If it drags or seems frantic, you can bet it’s an issue of pace—and your own writing follows the same principles. Watch out for anything that feels poorly paced in the movies you watch, and then apply this knowledge in your own stories.

Many beginning writers are told to tell their stories like they’re embodying a movie camera, panning around to show the full scale of their story’s world and all the action in it.

This is popular advice for a reason.

By watching movies, you’re internalizing the ways scenes are shot, how body language conveys emotion, and how a well-placed symbol can bring a story full circle. Turn around and apply this knowledge to your own work, and it’ll be all the better for it.

In particular, thinking like a movie camera can help solve the problem of “show don’t tell” that few people offer a real solution for. Instead of saying Hiccup “is sad” in some strange narration, the movie shows his sadness on his face, in how he carries himself, and in how he behaves.

You should do the same in your writing.

Remember to embody the camera. There is always a place for narration and internal dialog, but often the best thing you can do is think like a camera and focus on your character’s actions and behaviors first and foremost.

Ultimately, movies are a wonderful storytelling tool. Best of all, they’re also an excuse to spend an afternoon enjoying some good stories!

Grab a pen and paper and make it homework. Call over your resident furry friend, throw on some comfy clothes, and pop some popcorn. If you get stuck, check out the Movie Structure Archives as a reference. If you don’t see the movie you’re looking for there, send me a request to cover it. I’m always on the lookout for new movie recommendations! 🙂

What have you learned from your favorite movies? Let me know in the comments!

Thoughts on 4 Ways to Study Storytelling Through Movies