5 Tips for Fantastic Worldbuilding in Your Novel

Worldbuilding is the lifeblood of good fiction…

Whether it’s a magical realm inside a wardrobe or droids and lightsabers in outer space, if you’ve chosen to write “second world” fantasy—in other words, your story isn’t set in a recognizable version of our world—then you’ll need to spend some time polishing every aspect of your new fictional setting.

That’s a pretty exciting prospect, right? As author and worldbuilder supreme, you have the freedom to do whatever you want with your book—untethered by the rules and logic of Earth Prime. However, it’s also a task that can quickly become overwhelming. To provide some structure, here are five tips that will guide you through the process of worldbuilding and help you nail it right out of the gate!

Before we dive into today’s article, I’d like to introduce you all to Eve.

Eve is a writer over at Reedsy, as well as a travel and literary fiction buff. She and the Reedsy team were kind enough to reach out about sharing their expertise on the blog, so make sure to check out everything they have to offer—especially their free Reedsy Learning courses. They’re an excellent resource for authors, and one I actually use myself! 🙂 – Lewis

5 Ways to Level-Up Your Worldbuilding Skills

Draw on real history to inspire your world’s past: 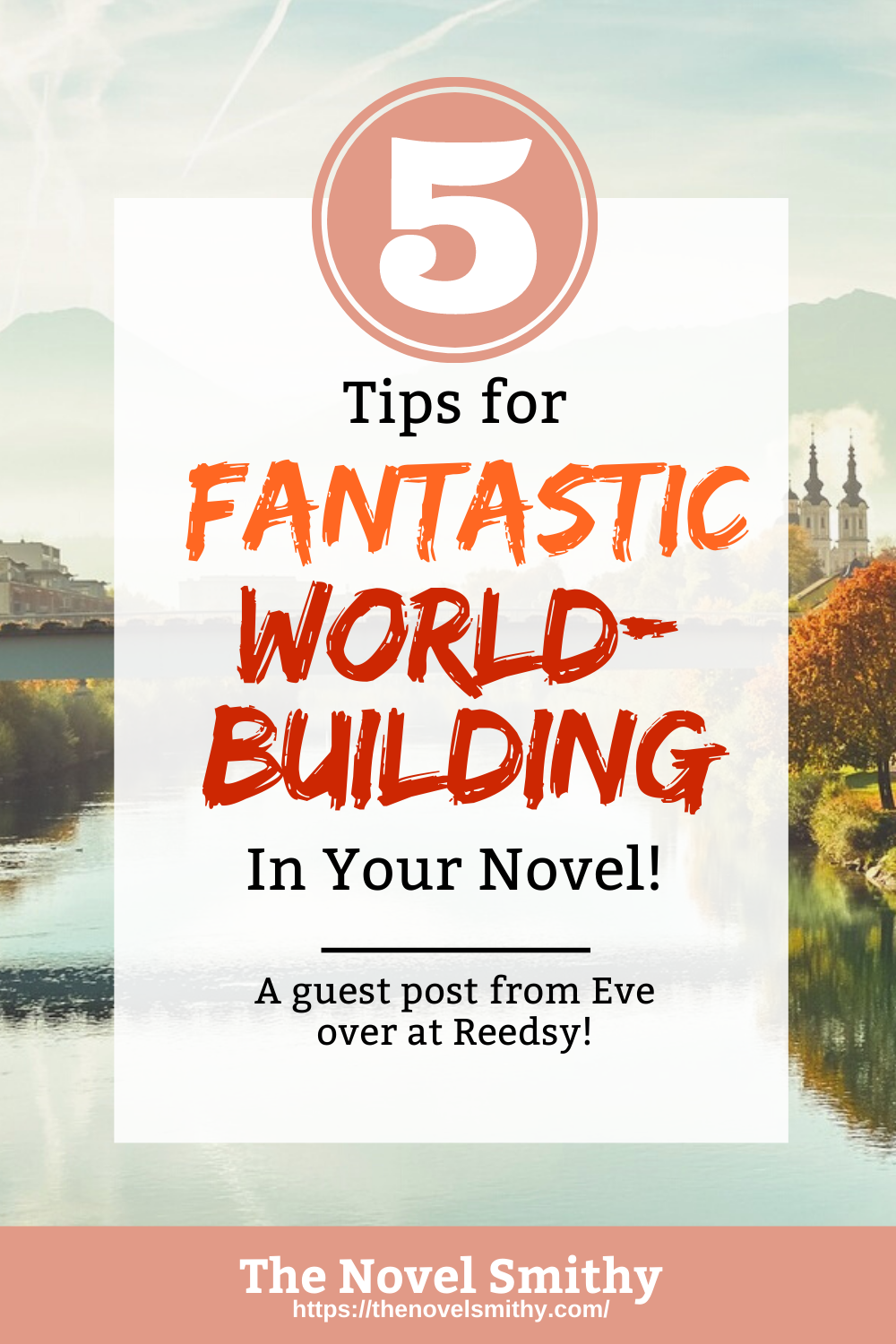 Developing a history for your fictional world—one that’s just as interesting as our own—will strengthen its depth and complexity, even if you don’t include every detail in your novel.

An excellent way to do this is to use real history as a starting point.

It’s no accident that famous fantasy worlds such as Middle-Earth and Westeros often feel quasi-medieval!

Both Martin and Tolkien drew inspiration from Europe’s rich history in order to better develop their own worlds. Tolkien combined the influence of classical civilizations with Anglo-Saxon history, while Martin patterned his book’s central conflict on The War of the Roses (fleshing it out with dragons and ice zombies, of course).

If you’re dealing with a futuristic world, you’ll need to have a grasp on the events and changes that led it from the present day to the time when your novel is set. Naturally, this is going to involve some speculation, but there’s no reason you can’t still borrow from the past. Perhaps a sort of Cold War led to a rapid advancement in robotics? Or a nuclear disaster like Chernobyl necessitated the development of new technology? A history influenced by real-world phenomena will always feel more believable, regardless of genre.

Highlight the ways in which your world is diverse:

Science-fiction and fantasy authors continue to draw on the “real world” when creating cultures for their fictional realms. Of course, if you are adapting either a current or historical culture—be it Norse, Islamic, or Aboriginal—make sure you represent it as accurately and sensitively as possible.

An easy way to avoid clichés and stereotypes is to use existing cultures as a jumping-off point, rather than a copy-and-paste job. Try pulling inspiration from a variety of sources to create some diversity! Here are a few ways you might introduce heterogeneity to get you thinking:

If the landscape and climate of your world varies from region to region, ask yourself whether this will affect its different cultures. Take Martin’s A Song of Ice and Fire—the people in the Kingdom of the North, for example, live and think very differently from the people in King’s Landing, largely because of geography.

When designing your world’s systems of government, law-making, and law-enforcement, consider how gender, class, or race might influence the experiences of different groups. In The Handmaid’s Tale, women not only fare much worse than men overall, but are subject to a class system that strips single women of basic human rights.

The evolution of language not only indicates a change in society as a whole, but also serves as a reflection of cultural diversity when societal groups spawn their own dialects. Hoban’s Riddley Walker, for example, is written in a dialect shaped by the regional accent of Kent, the narrator’s awkward pre-teen slang, and Hoban’s post-apocalyptic vernacular.

If you do choose to use a real cultural group as a starting point, and you’re worried about getting things wrong or accidentally exoticizing that group, you can turn to professional sensitivity readers to check your work for any points of tension.

Set firm rules and boundaries for your magic system:

Chances are, if you’re building your own fictional world, it’s so that you can create a magic system or piece of life-changing technology, free from the constraints of the real world.

However, in our world and any other, magic and science need firm rules and boundaries. Without them, your characters’ actions would have no consequences, and you would have no plot! If something terrible happened, then time could simply be reversed; if your hero found themselves in danger, they could escape just “by magic”—and if they didn’t, it doesn’t matter, you can resurrect the dead anyway!

Take a closer look at your favorite books and you’ll see that their magic systems are shaped by rules and regulations, and at their center, you’ll find a governing “ground rule.” For example, in Ursula Le Guin’s Earthsea universe it boils down to this: good wizardry is in harmony with nature, while bad wizardry, such as defying death, upsets the balance. This distinction forms the basis of everything, from the roles of different species, to the events on which the novels hinge.

You might also want to think about how magic functions practically in your world.

Is magic hereditary? Does it have to be learnt? How is it used in society? Let’s look at Earthsea again.  There, magic is a skill you are born with, which the most gifted develop in school. If they are successful, they become staff-carrying wizards, while others use the “lesser arts” to become court sorcerers or weather workers.

Characterize your world with a few distinctive details:

As well as knowing the overarching structure of your magic system, you’ll want to make your world unique by adorning it with distinctive details. This doesn’t mean working through the magical quirks and qualities of every little thing—authors who attempt this could end up with a world that’s disorganized and overstretched.

What it means is finding the right details to devote your attention to.

Characterize your world with a few hallmark quirks that you might use to promote your book to a fanbase. Let’s take Harry Potter as an example. One of my favorite parts of its world is the Ministry of Magic, a governing body built around the “ground rule” that Muggles must not know about magic. There’s a system for enforcing magical law involving Hogwarts students taking soul-crushing jobs in magical middle-management—but it’s the details that bring it to life.

Having a few unique worldbuilding details to sprinkle into your story can really bring your world to life! #amwriting Click To Tweet

For example, witches and wizards go to and from the atrium via gilded fireplaces that run up and down the walls, and employees send messages to different departments via flying memos (they had formerly used owls, but the mess was unbelievable). These details surrounding transport and communication are key recurring elements in the Harry Potter universe. They add to the magic while creating a sense of consistency.

Unlike the boundaries of your magic system, details will do little to advance the plot. But having a few to sprinkle consistently into your story will really bring your world to life! Not to mention, they can be great marketing tools for your book launch and beyond, as fantasy fans who appreciate the quirks of fictional worlds will have easy, fun ways to engage with your book.

Build your world to complement your story:

As I hope I’ve shown, building your own fictional realm is incredibly exciting. And lots of fantasy and sci-fi authors will even dream up elements of their worlds before planning any sort of plot or storyline.

However, try not to focus on the setting to the detriment of the story.

If you don’t take the time to outline your plot before getting into the nitty gritty of worldbuilding, then you may end up tweaking the rules of your world’s reality to fit your story—which can lead to inconsistencies and plot holes. To make sure that your story is compelling (and hole-free), use the worldbuilding process as a way of complementing your plot and your characters. This way, setting and story can work hand-in-hand to build a stunning book!

What’s unique about your story’s world? Let me know in the comments!

Eve Lynch is a writer with Reedsy, a marketplace that connects authors and publishers with the world’s best editors, designers, and marketers. In her spare time, Eve enjoys reading contemporary fiction and writing short stories.

Thoughts on 5 Tips for Fantastic Worldbuilding in Your Novel