Your novel’s beginning sets up everything to come.

After all, arguably the most important part of any journey is its beginning. Thus far, Act 1 has served to set up this beginning for your story, but it isn’t until now that your protagonist’s journey will truly begin—with the First Plot Point.

This is the pivotal moment that begins your story. The rest of Act 1 was all about moving the relevant pieces into place to prepare for the adventure ahead. The First Plot Point finally sees your hard work pay off as your story kicks into action, marking an important narrative shift and the true beginning of your protagonist’s adventure!

The First Plot Point: The Defining Moment of Act 1 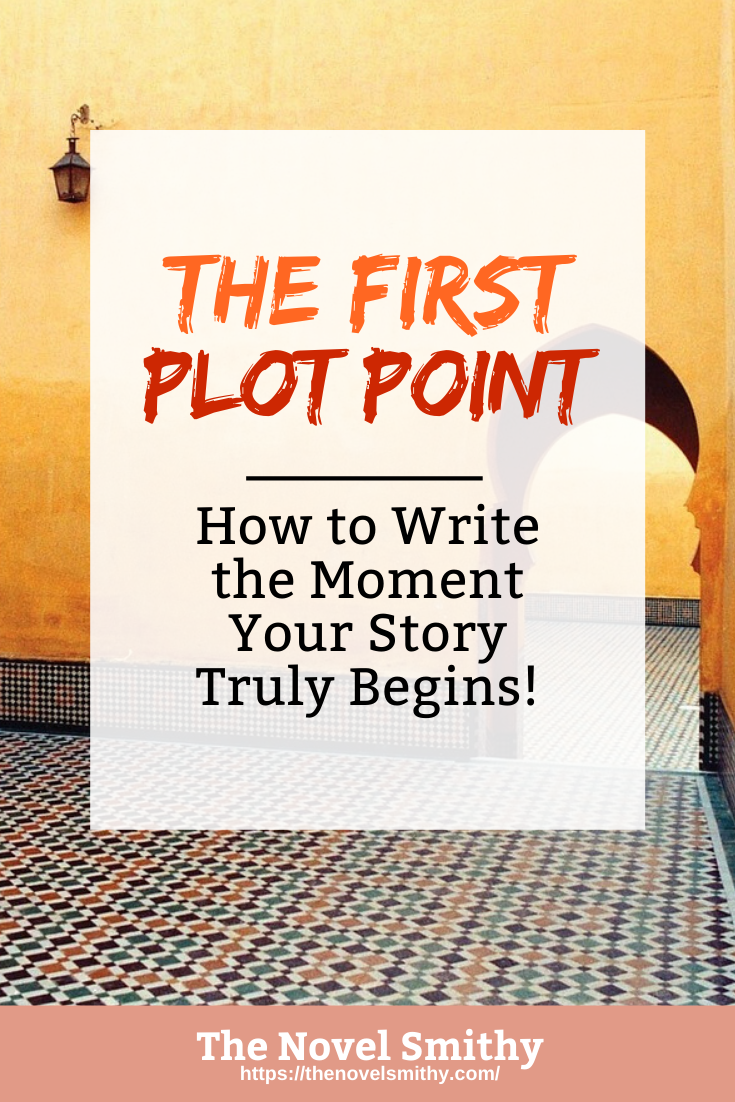 The First Plot Point is interesting because it fulfills two roles within the Three Act Structure, acting as both the end of Act 1 and the doorway into Act 2. If you’ve ever heard the term “Crossing the Threshold” in reference to another story structure, the Hero’s Journey, then you’ll quickly see just how much overlap it has with the First Plot Point!

But what exactly is the First Plot Point?

What role does it play in your story?

In simple terms, the First Plot Point is the pivotal moment where your protagonist begins their journey through an important decision they make. This could be the decision to set out on an adventure, to sacrifice themselves for someone they love, to run away, or to speak up against their family.

Whatever their decision may be, after this scene, they will have officially crossed the point of no return by deciding to engage with the plot. This pushes them forward through the tests and trails of Act 2, and ultimately to their confrontation with your antagonist at the Climax.

Ideally, the First Plot Point should occur right at the end of Act 1, around 25% of the way through your novel. Because of how important this plot point is, it’ll play very specific roles for both your plot and your protagonist, roles that need to occur before the transition into Act 2 can begin.

At the First Plot Point, your protagonist will need to make a key decision. This decision is almost always related to the Key Event, which if you remember from part two of this series, is the moment your plot is introduced to your protagonist.

This newly relevant conflict gets the wheels moving and prompts your protagonist’s decision here, which triggers the first steps of their adventure. By deciding to “cross the threshold”—even if they’re forced to do so to some extent—they become an active player in your story, and in your plot. Essentially, along with pushing your plot forward, the First Plot Point also ensures your protagonist is fully engaged with that plot.

By choosing to 'cross the threshold' and begin their journey, your hero takes control of their story! Click To Tweet

This secondary role is to act as the first step your protagonist takes in overcoming their inner struggle and completing their character arc. Without this pivotal decision, they would never have faced the challenges of Act 2 and never been able to grow past their flaws.

For this reason, the First Plot Point should relate directly to your protagonist’s inner struggle. Their decision here will grow organically out of their desire to soothe their unhappiness or inner pain, adding extra impact for your reader and your protagonist all at once.

Because of how important the First Plot Point is to these two storytelling elements, it has a specific place it should occur within your story.

This is critical to your novel’s pacing, both for your plot and your protagonist’s arc.

Act 1 takes up roughly the first 20-25% of your story, and the First Plot Point should occur at the very end of this act—and this length is chosen on purpose.

This solid quarter of your story gives you enough time to develop a baseline for your world and characters that will help make the growth and challenges they face during Act 2 meaningful when compared to their previous life. If the First Plot Point comes too late, your reader will feel like your story is stagnating. On the other hand, if it happens too soon, there won’t be enough time to get them invested in your story or flesh out the important aspects of your story’s world.

At the end of the day, without a strong First Plot Point your story will never get off the ground. It’s the catalyst that kicks your story into motion—and you don’t want to shuffle awkwardly into the conflict when you could enter it with a bang!

The First Plot Point in Action

Even if you haven’t watched Mulan in years, you’ll probably remember its First Plot Point.

The night after her father is drafted, Mulan challenges him, asking why he would go to war when he knows he’ll die. She’s clearly distraught at the thought of losing him, and angry that he doesn’t understand how much their family needs him. However, her father snaps back, saying he knows his place and that she would do well to learn hers.

She doesn’t know her place and doesn’t know how she can be worth something to her family while still being herself. She thinks her family is ashamed of her. When her previously calm and understanding father lashes out at her, this feeling becomes even stronger. Now she has been backed into a corner, and this leads her to the pivotal decision all of Act 1 has been building to.

Disguised in her father’s armor and carrying his sword, Mulan runs away to join the army, pretending to be her father’s son to save him from the war.

This is a beautiful scene.

The iconic image of Mulan chopping off her long hair with her father’s sword and donning his armor as thunder rumbles outside, has stuck with viewers long after the movie’s release. Even more painful, earlier in this scene she sneaks into the room where her parents are sleeping, taking her father;s draft notice and leaving her hair comb in its place.

Mulan is systematically shedding the things that define how society sees her, venturing into the unknown to find who she actually is.

Of course, not only does this First Plot Point provide a great moment of character development for Mulan, but it also establishes the stakes of the journey ahead.

Mulan’s grandmother wakes up panicked, realizing Mulan is gone. Her parents run out into the courtyard and see the open gate swinging in the rain. Her mother says they should go after her, but her father tells her they can’t.

If anyone discovers her true identity, she’ll be executed.

In the background, her previously jovial grandmother offers a solemn prayer to their ancestors for her protection. This is where this scene really benefits from all of the characterization done throughout Act 1. The stakes are established not because of the mention of execution, but because of the contrast created by these characters, best shown through Mulan’s grandmother. Compared to how lighthearted she has been throughout Act 1, her sudden seriousness leaves a strong impression.

Essentially, we understand the danger Mulan is in thanks to the reactions of those that love her. The movie doesn’t need to show decapitated heads or the horrors of war at this point. All it needs is the powerful grief we see as her family realizes they may lose their beloved daughter—and can do nothing about it.

The last major role of Mulan’s First Plot Point is to establish the movie’s Dramatic Question:

“Will Mulan survive the war and return to her family with pride?”

This shows up a bit late in her story, with the First Plot Point being the last moment to effectively introduce the Dramatic Question. However, it comes up organically, and the movie doesn’t lose much despite the late reveal. There’s plenty holding the viewer’s interest in the meantime, and only around twenty minutes pass between the Hook and the First Plot Point.

Before we move on, I think it’s important to reiterate how well done this scene is, both structurally and in how it uses its characters.

Mulan’s First Plot Point is arguably one of the best scenes in the entire film because of how it sums up Mulan’s character for the audience—without the need for any dialog on her part. Instead, her actions and the actions of her family are all we need to understand her motivations and thought process, as well as the danger created by her choice.

This expert combination of theme, symbolism, plot, and character make this a highly memorable moment, just as the First Plot Point should be! This was the perfect start for Mulan’s journey.

I hinted at Nausicaä of the Valley of the Wind’s First Plot Point pretty openly in the last post on the Inciting and Key Events. With the Tolmekian invasion, Nausicaä is presented with a painful choice—become a hostage in exchange for her people’s safety or die a martyr like her father.

Instead of encouraging further bloodshed, she tells her village to submit to the invaders and keep their heads low. She can’t bear to see any more violence committed in her homeland and gives herself over as a hostage. This sets her up for the challenges and tests that will come throughout Act 2 as she struggles to end the war and return home.

Of course, you may notice how this differs from Mulan’s First Plot Point.

A Foil for Nausicaä:

This contrast between Nausicaä and the world around her is drawn most effectively by the introduction of Princess Kushana, one of the many antagonists of the film.

She enters the scene as the leader and mastermind of the Tolmekian invasion, acting as both a mirror for Nausicaä and her polar opposite. Like Nausicaä, she’s the respected ruler of her people, and she’s concerned with the safety of her kingdom. However, while Nausicaä leads her people through peace, Princess Kushana seeks their security through power and war.

Princess Kushana is the physical embodiment of the struggle this world suffers from.

What this means is that Nausicaä’s First Plot Point develops her character arc differently than Mulan’s, while still acting as a catalyst for her story. For the most part, this boils down to the differences between flat arcs and the other two change arcs—positive and negative.

Despite these differences, Nausicaä’s First Plot Point still fulfills its role, even if it’s a less impactful scene than Mulan’s dramatic decision to leave home. What follows for Nausicaä will be a difficult trial, testing her resolve to uphold her non-violent truth. For now though, her journey is just beginning.

At the end of the day, your novel’s First Plot Point will be one of the most important plot points in your story. Not only will it set your plot into motion, but it will also shape your protagonist’s inner and outer journeys.

Perhaps most importantly, it is your chance to leave a powerful impact on your readers, one that will endear them to your hero and keep them reading until the very end!

Do you have any questions about the First Plot Point? Let me know in the comments!