Fanfiction: Why Every Novelist Should Write It - The Novel Smithy
Skip to Sidebar

Fanfiction: Why Every Novelist Should Write It

“Where does inspiration come from?”

If you asked ten writers this exact question, you’d get at least a dozen answers. Everyone finds inspiration in different ways—by listening to conversations, through dreams, from artwork or music, or through personal experiences. Few would say these methods are illegitimate, because most people understand that inspiration is a personal thing. We all have our own quirks and preferences.

Why then are other’s stories excluded from this vast pool of inspiration? Can you not draw inspiration from other novels, movies, or series? Why is fanfiction off limits?

What is Fanfiction All About? 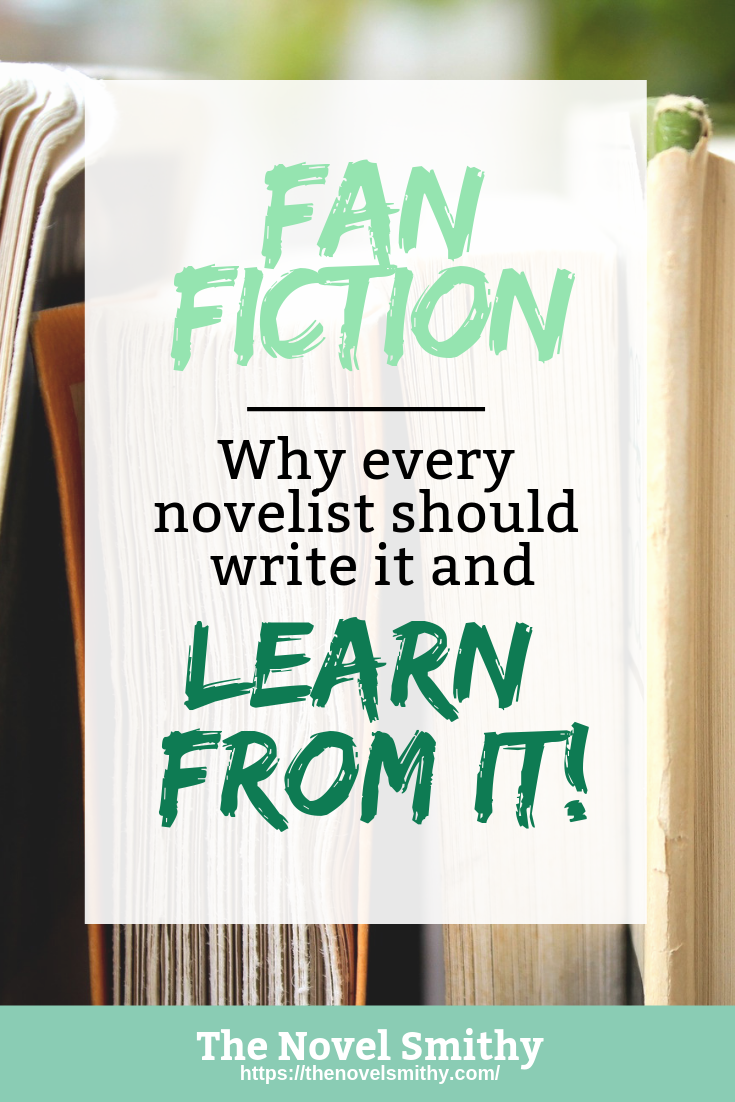 If you’re unfamiliar with it, fanfiction is any written work that riffs off of an established story using existing characters, settings, or plot lines. Often, fanfiction writers will develop their own, non-canon plots and cast members, but the underlying source is still clear.

Unfortunately, people outside the world of fanfiction seem to look down on the practice as a weird novelty at best.

There are many reasons fanfiction is stigmatized, most of which are beyond the scope of this article. A simple problem is copyright, an issue online fanfiction communities have wrestled with for years. Other issues of age, gender, and sexual experimentation come to mind. Fanfiction is often a way for teenaged and college-aged women, as well as LGBTQ folks, to explore their sexuality in a safe and personal way.

Essentially, many people judge fanfiction simply because of the people who write it.

And of course, the rise of famous fanfiction authors has only added fuel to the debate, especially with the popularity of 50 Shades of Grey, a spin on the equally popular Twilight series. While hating E. L. James is fashionable in many circles (for some justified reasons and other, decidedly less justified reasons), it leaves many wondering—is fanfiction really that bad?

I would argue no.

What Fanfiction Means for Novelists

Think about it—what is one of the hardest parts of writing a good story?

Often, creating a coherent plot isn’t the most difficult thing you’ll face as a novelist. Instead, you’ll struggle with building in-depth story worlds and meaningful characters. In fact, some of the most common issues I see among beginner writers aren’t with their plots, but with their characters. After all, human beings are complex. Representing them on the page in a believable way is never easy.

Well, practice makes perfect, and fanfiction is one of the best ways to practice writing.

With fanfiction, you can borrow or ignore as much as you want. For example, if you’re writing The Lord of the Rings fanfiction you can use all the book’s existing characters or create an entirely new cast. You can put Sam and Frodo in modern New York City, or drop characters from other stories into the hobbits’ world instead.

By choosing what to borrow and what to create yourself, you decide the level of challenge you want to face. Put short, fanfiction gives you the tools you need to create enjoyable stories even when you’re new to the process.

It builds confidence and gives you a safe, low risk platform to practice and hone your own writing skills.

Fanfiction takes a lot of the difficulty out of brainstorming as well. For someone looking to jump into writing and learn the basics, having to brainstorm and create an entirely unique story with a cast of characters can be extremely intimidating. By drawing inspiration and elements from existing stories you take away a lot of the roadblocks preventing beginners from becoming writers.

Regardless of its reputation, when you look at the benefits of fanfiction it’s clear that a lot of the hate is, frankly, unjustified.

Five Reasons Why Fanfiction is Awesome for Novelists

Like I said above, one of the hardest things for beginning novelists is creating worlds and characters. But what if you had them created for you? All you had to do was use your own words to portray them on the page.

This is by far one of fanfiction’s greatest strengths!

When writing fanfiction, you’re not relying solely on your own skills to form a good story. Instead, you have an existing foundation to work from, allowing you to focus more on the quality of your writing itself. You’re free to experiment and get a feel for what works and what doesn’t within your prose, dialog, structure, and more.

While this requires you to be familiar with the characters, settings, and plot threads you’re basing your fanfiction on, most fan writers choose their subjects because of their love for the original story. Once you have this familiarity established you can deviate away from it, introducing unique elements and giving yourself the flexibility to evolve your writing in stepping stones. Instead of creating a poorly formed character and then struggling to understand why their characterization isn’t coming across in your story, you already have a fleshed out cast and world to work with.

Slowly but surely, you’ll be able to hone your writing skills thanks to the solid foundation you started with. This means that, if you’re actively trying to challenge yourself, fanfiction is an excellent way to practice your writing skills without having to start from scratch.

Similarly, fanfiction allows you to study stories that already resonate with you.

Most fan writers write fanfiction because they love the original story it’s based on. They want to explore alternative endings, spend more time in that story’s world, or experiment with the existing characters in new situations.

As a result, writing fanfiction lets you become intimately familiar with the original story’s world and characters. Essentially, you’re studying storytelling by breaking down an existing work of fiction, learning its ins and outs, and then putting it back together in new and interesting ways. Much like a mechanic learns to repair cars by first taking them apart, you’re learning to write your own novel by first deconstructing a novel (or movie) you adore.

Far from just reading about writing, you’re going out and creating stories, improving your skills as a result!

One of fanfiction’s other benefits is found in its community.

Now, let’s be clear—not all fanfiction communities are created equal. Some groups are downright hostile, while most are welcoming, open places that encourage creativity and discussion. If you venture into the world of fanfiction, choose your community carefully.

However, by and large, most fanfiction groups have a few things in common:

In such a solitary practice as writing, this sense of community is tremendously meaningful. Knowing others are waiting for your story’s next chapter encourages you to stay motivated, and the feedback people leave can often be genuinely helpful. Many beginning writers won’t even realize their mistakes until someone points it out to them and having a community of other writers there to encourage and critique you can help your writing grow by leaps and bounds.

It’s both fun and gratifying to be a part of a larger community and fanfiction provides that for writers, all with the benefit of anonymity. If you post a story only to realize it’s horribly flawed (or downright awful) a few months later, guess what?

No one has to know it’s you, and you’re free to post a better story next time. 🙂

Enjoying the Freedom to Experiment:

It’s undeniable that part of the stigma around fanfiction is that… well, a lot of it is rather weird.

From aliens to shape shifting, steamy sex scenes, random romantic pairings, and gender bending, you can find just about anything in fanfiction. It’s understandable why this would turn many people off.

Yet, I’d argue that this is part of what makes fanfiction great.

When writing fanfiction, you have the freedom to be creative and weird, to truly experiment with anything and everything, all within a community of other fans. Instead of trying to carve out an unusual niche with your original work, you can settle into an existing fan base and learn about what you do and don’t enjoy writing about. Whether it’s your cup of tea or not, entire subgenres have sprung out of this kind of experimentation (especially in the romance genre).

Plus, this kind of experimentation helps you push the boundaries of how you write characters and plots—you already have an existing character to work with, so now you can deeply explore how they think and act under different circumstances (some logical, some totally wild).

Not only is experimenting with your writing fun, but it’s a great way to improve your characters, plots, and settings. If you know your characters well enough to write them consistently in any situation, time period, or setting, then you’ve truly mastered them!

“There’s a time and place for everything, and I believe it’s called fan fiction.” ― Joss Whedon

Sharing Your Passion for Stories:

Finally, fanfiction is a natural extension of writing.

It’s normal to want to rewrite the stories you love in your own unique way. After watching an exciting movie, almost any writer will be left imaging how it could have ended if only “so-and-so” did “such-and-such.” Not only does fanfiction let you make that alternative ending a reality, but it lets you spend more time in your most beloved story worlds, creating fun new adventures for the characters you adore so dearly.

It encourages a deeper connection with your favorite stories—far from simply consuming them and waiting for the next one, you become an active participant in the creative process.

In a world that seems so focused on consuming stories rather than creating them, it’s hard to argue against a proposition like that!

“Fanfiction is what literature might look like if it were reinvented from scratch after a nuclear apocalypse by a band of brilliant pop-culture junkies trapped in a sealed bunker. They don’t do it for money. That’s not what it’s about. The writers write it and put it up online just for the satisfaction. They’re fans, but they’re not silent, couch bound consumers of media. The culture talks to them, and they talk back to the culture in its own language.” ― Lev Grossman

Do you write fanfiction? Let me know in the comments!