It’s not that appearances aren’t important…

Character descriptions can be a great way to form your reader’s first impressions. We all make snap judgements of a person based on their looks, whether or not we should. But, if that’s the case, why are your protagonist’s blue eyes, shoulder-length blonde hair, and lean figure meaningless to your story?

Well, they tell you nothing about that character as a person. Are they shy or are they confident? How do they stand out from those around them? What do they make others feel? Above all, what traits do your readers need to know, and what’s just extraneous fluff?

How to Write Character Descriptions that Matter 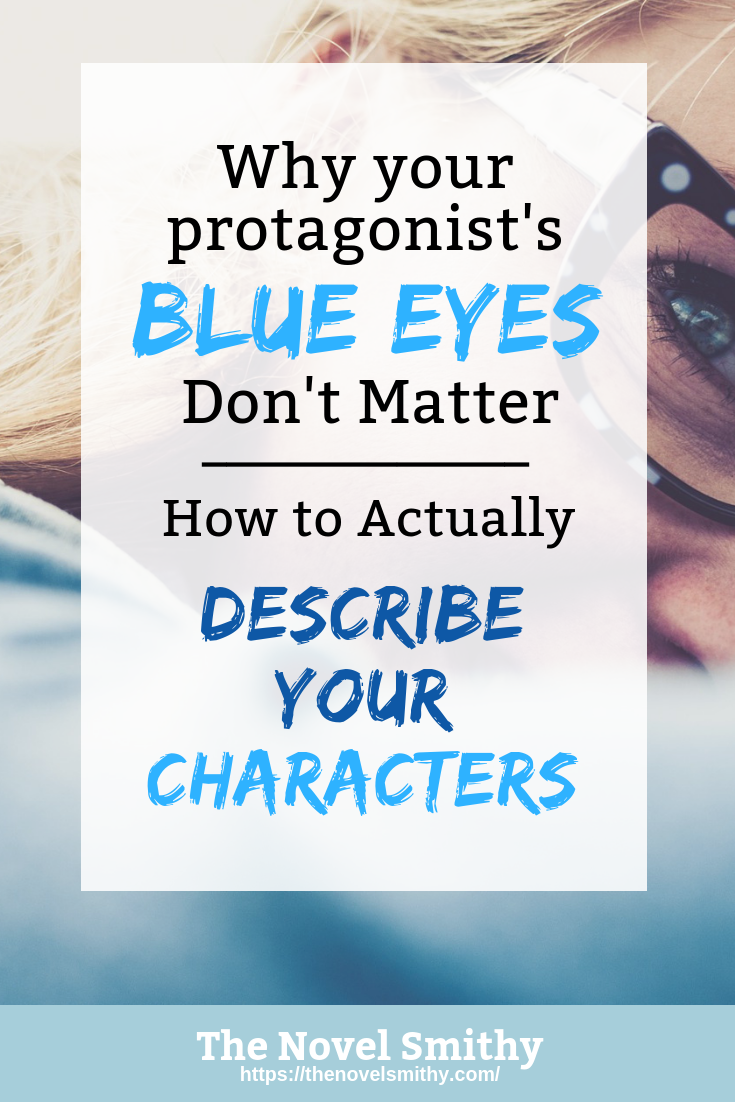 As authors, we almost always have a mental image of how our characters look and move. Because of this, it seems only natural to start with their appearance when introducing them to our readers. After all, it’s easier to decide on hair color, height, weight, and skin tone than complex issues of character arcs and inner struggle.

The problem is, what do you really notice about the people you meet?

What stands out to you, even months or years after you’ve met someone? Most likely, it wasn’t the exact details of their appearance or eye color, but instead the way they moved, spoke, and made you feel. This is how you should think of the characters you create for your novel as well, specifically when writing character descriptions.

Of the four, this one comes first on our list because it’s the most common place authors slip up. Even if they follow every other principle on this list, it’s easy to get carried away describing the minutia of a character’s appearance, forgetting that there are more important things to worry about.

So how do you know what to include or cut?

Well, start with these questions:

As you answer these questions, try to pick character descriptions that can apply to multiple—or all—of these questions. The goal here is to pick only a handful of physical traits, and to pick ones that meaningfully distinguish that character from the rest of your cast.

If your character lives on an alien planet where everyone has orange cat eyes, their bright purple ones will stand out. Better yet, perhaps those same purple eyes become relevant to your plot as the symbol of a prophecy or special power. alternatively, your story may focus on the prejudice they face due to their unique appearance.

What makes both of these scenarios work is that the character’s physical characteristics—in this case, their eye color—meant something to the story.

Ultimately, their character descriptions had a lasting impact on their adventure.

While not every story will deal with symbols of prophecy or discrimination, this principle still stands—limit physical descriptions to what stands out or has meaning.

As I mentioned earlier, it’s often the way someone makes us feel that sticks with us the longest. This doesn’t cancel out their physical appearance—instead, it magnifies certain traits.

The same idea applies to your writing!

While the color or size of your character’s eyes may not stand out on their own, their intensity and focus will, giving you a sense of their determined or severe personality. On the other hand, someone described as rolling their eyes and paying little to no attention to what’s going on will stick with readers as haughty or overconfident.

Either way, try to purposefully choosing character descriptions that say more about your characters than “well, they’re a brunette.”

Think about the people in your life—what about their appearance stands out the most?

Perhaps your grandmother has a tendency to bite her nails. Her hands probably stand out in your memories. In the same vein, your college roommate’s habit of braiding her long hair each morning is something you’ll never forget. Her braids were always perfect, and whenever someone asks you to describe her you think of her hair first.

Both of these are examples of how behavior defines the physical characteristics you associate with the people in your life. The same idea applies to your characters. So, ask yourself—how do they move and behave?

Do they have any quirks or rituals that stand out when you think of them?

While not every character has distinctive habits—or needs to—they can still be a helpful tool for choosing which character descriptions will stick with your readers, and which won’t.

The last way to determine what character descriptions are worth adding to you story is to think of how these descriptions communicate your character’s emotional state.

Far more than physical traits, your character’s emotions will impact your story.

A character that is deathly shy will interact with your story’s plot much differently than one that is confident or careless. These traits not only affect that character’s description, but also their behavior.

This is also an excellent way to communicate a character’s emotional state, without blatantly stating how they’re feeling. Describing a character twirling their hair or fidgeting in their seat tells your reader how they move and act, but also how they feel in that scene.

The Case of Ms. Hermione Granger

Of course, all four of these principles make sense on paper, but what do they look like in practice? To get a better idea of how you can implement them, let’s look at a test case—Hermione Granger.

The toadless boy was back, but this time he had a girl with him. She was already wearing her new Hogwarts robes.

“Has anyone seen a toad? Neville’s lost one,” she said. She had a bossy sort of voice, lots of bushy brown hair, and rather large front teeth.

“We’ve already told him we haven’t seen it,” said Ron, but the girl wasn’t listening, she was looking at the wand in his hand.

This is an excellent description of Hermione, one that limits physical characteristics to only what stands out and is important.

Is she tall or short, white or black, blue eyed or green? We don’t know. Instead, all we get—and all we need—is that she’s got a bossy voice, bushy hair, and big teeth. It’s the other, far more important elements of this character introduction that create the standout personality so many of us have come to love.

The first description we get of Hermione is that she’s “already wearing her new Hogwarts robes,” followed by her bushy hair and big front teeth.

Other than that, Rowling leaves her appearance to the reader’s imagination. Everything we needed to know about her—her studiousness and her young, somewhat wild appearance—has already been quickly and clearly established.

Arguably the strongest picture we get of Hermione comes from Ron’s reactions.

He’s startled by her intensity and focus, and later he’s put off by her obsession with studying magic. Clearly, her zealous excitement for Hogwarts is out of the ordinary, at least among Ron and his friends. Not only that, but we get a strong sense of her domineering, intense personality—all thanks to the way other character react to her.

All of Hermione’s movement aligns with her intense personality—she ignores Ron, and is instead laser guided to his wand. The quick, sharp description of “she sat down” tells us not only what she’s doing, but how she is doing it.

When combined, we can not only imagine Hermione’s behavior in our minds, but form a strong first impression of her that will last throughout the first book.

While we get little of Hermione’s emotion in this scene, it’s her contrast to Neville that really makes her stand out.

While he’s anxious and unsure, she’s firmly in charge, marching up and down the train to find his toad for him. That, combined with her “bossy voice,” gives us a solid understanding of how Harry and Ron perceive her—and how Rowling wants us to perceive her as well.

What you should take away from Hermione’s example is that J.K. Rowling knew the importance of letting her readers experience and imagine her characters in their own unique ways. She gave us only the key character descriptions we needed, while focusing on other important traits that gave Hermione a clearly defined personality—and one we would easily remember.

The rest was left up to us, just as it should be.

Writing Character Descriptions of Your Own

Most importantly, you can apply all of these principles to your own novel. By avoiding extraneous character descriptions, you’ll maximize the impact of both your character’s introduction and their ongoing scenes in your novel.

Strong and purposefully chosen descriptions make your characters more memorable and distinct from others in your cast. Instead of focusing on a laundry list of physical traits, remind yourself of these four elements and turn your characters into real, thriving people in the minds of your readers.

Perhaps you’ll end up creating the next Hermione in the process! 🙂

What is the best character description you’ve read? Let me know in the comments!