The Truth: How to Complete Your Protagonist's Character Arc - The Novel Smithy
Skip to Sidebar

The Truth: How to Complete Your Protagonist’s Character Arc

“The truth will set you free.”

Any biblical connotations aside, this quote is something I strive to always keep in mind when writing characters for my novels. After all, a character’s arc hinges on them learning an important lesson, discovering something greater about themselves and their world in the process. It quite literally sets them free.

Still, in the whirlwind of writing plot twists, drama, and conflicts, it’s easy to forget the simple, yet powerful influence of this lesson—known as your character’s “truth.”

The Key to Character Growth

Just as you can trace your greatest moments of personal growth to major life events, your novel’s characters are no different. 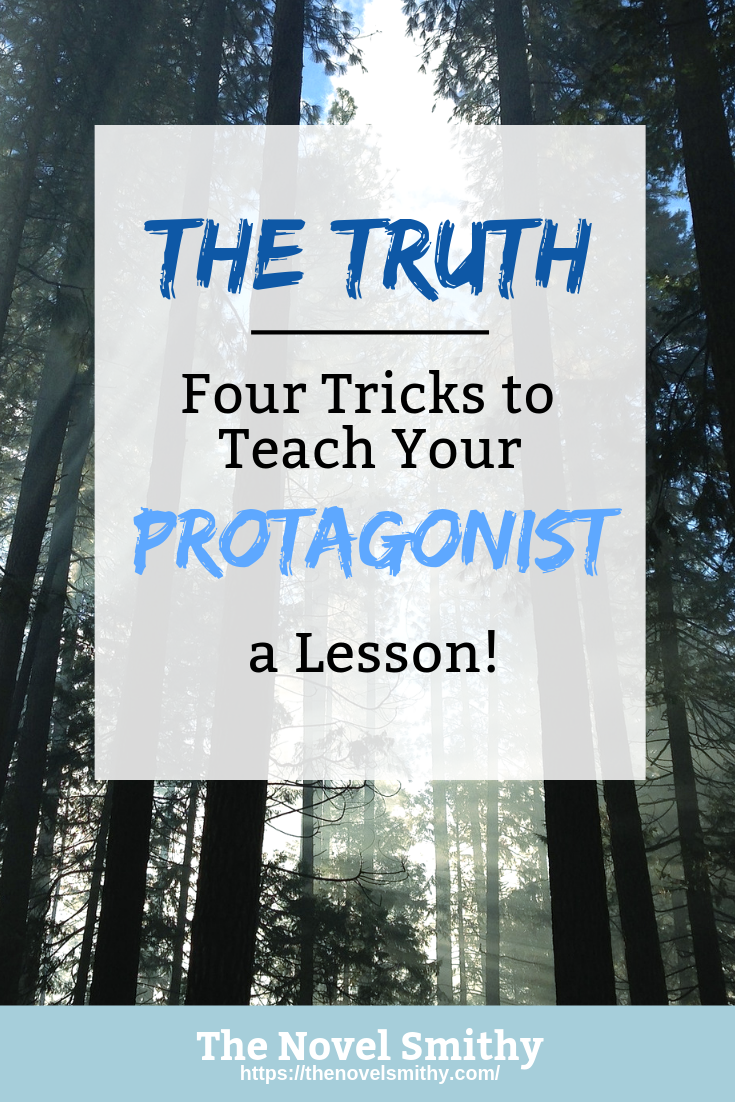 The challenges they’ll face during their journey will shape them as people, forcing them to see their world through new eyes. Not only is this compelling for your reader, but it’s of fundamental importance for the character arc of your protagonist.

We’ve talked a lot about the importance of your protagonist in the past—their character arc drives your plot, after all—but never in the context of their truth.

While it’s easy to throw out words like generosity, courage, or perseverance as examples of a character’s truth, it’s much harder to understand how these actually apply to your protagonist.

With how important your protagonist’s truth is, I think it’s about time we set the record straight.

While character creation can often feel like an abstract process, it’s important to remember that the characters in the stories we love are still fundamentally human. Just as we grow and learn, they grow and learn. When thought of this way, it’s much easier to understand the purpose of your character’s truth.

Essentially, their truth is what allows them to overcome the conflict of your story.

Not only that, but it takes your novel out of the realm of “fun” and into the realm of “amazing” by giving your readers a feeling of catharsis. After all, it’s pretty satisfying to see a beloved character succeed!

What is Their Truth?

A term popularized by K.M. Weiland, a character’s truth is the lesson they need to learn to complete their character arc and overcome their inner struggle. To start, here are some helpful terms to know:

The Inner Struggle: This is the damaging belief your character must face to complete their arc. They may believe they’re weak or inferior to others, or they may refuse to trust anyone but themselves. They’ll confront this inner struggle at the Climax and their ability to overcome it will determine if they succeed or fail in the conflict of your story.

The Wound: Your character’s wound is the deeply influential or negative experience(s) in their background that feeds their inner struggle. Wounds can span from growing up under oppression to a simple episode of school-yard bullying, depending on the scope of your story.

Compared to their inner struggle, your character’s truth is rather simple:

The Truth: your character’s truth is the lesson they need to learn to complete their character arc and overcome their inner struggle. It’s at odds with their current identity, and they must struggle throughout their journey to both discover and embrace their truth.

How Does the Truth Affect Your Character?

It’s important to remember that, like everything else involved in character arcs, the truth is intertwined with the other elements of your character and plot.

How Does the Truth Affect Your Plot?

Since embracing their truth is the major goal of your protagonist’s arc, and since their arc shapes the progress of your plot, their truth will have a role to play within your plot as well.

Your protagonist’s truth is what allows them to overcome the conflict of your story.

As a result, it will be closely linked to your story’s Third Plot Point and Climax.

Take Schindler’s List: Oskar begins the movie as nothing but a pragmatist. He joins the Nazi’s for political clout and protects his Jewish factory workers only to keep his business running. However, upon witnessing the massacre in the Jewish ghetto, Oskar discovers his truth: he must sacrifice his own wealth and safety to protect as many innocent people as possible.

Of course, Oskar doesn’t embrace his truth right away. He spends much of the film wrestling with it, torn between his inner struggle (selfishness) and his newfound truth (selflessness). The ultimate payoff is when Oskar reaches the Climax where the women from his factory are sent to Auschwitz. Not only does he go to save them, but he uses most of his money bribing the guards to release them.

It’s through this scene that Oskar fully embraces his truth, coming out of the darkness and into the light.

How Does the Truth Affect Your Theme?

Your protagonist’s truth has a larger role to play within your story as well: it acts as a great metric for your story’s theme.

An easy way to understand this is through fables.

These often silly, bizarre, and anthropomorphic stories are all centered on their own unique lesson, or theme. For instance, “The Tortoise and the Hare” teaches a lesson of perseverance and humility, with the Tortoise winning the unfair race only through his steady progress.

Although your novel will be much more complex than a fable, they follow similar principles. Much like a fable is trying to teach the audience a lesson, your story will teach your protagonist a lesson. This lesson is almost always closely related to your story’s theme.

4 Tricks for Finding Your Character’s Truth

To find your protagonist’s truth, let’s start from scratch. If you have very few details nailed down for your protagonist, you’ll want to begin by looking to your story’s theme.

Start by thinking about the story you want to tell. What lessons do you want to pass on? How could you frame these lessons as a theme? Better yet, if your story was a short fable, what would you be trying to teach your readers?

For Example: Star Wars: A New Hope centers on a theme of faith. Luke is asked to trust in the Force, Han Solo is told to have faith in the rebel effort, and Obi Wan encourages Luke to believe in his own abilities. It makes sense then that Luke’s truth is faith in the Force.

Ask Yourself: “What lesson do I want my audience to learn?”

Another way to discover your protagonist’s truth is to look at their inner struggle. If you’ve already begun creating their character arc, you probably have a good idea what will hold them back throughout your story.

What will be your protagonist’s biggest challenge? What will they struggle to overcome?

Fortunately, once you know your protagonist’s inner struggle, their truth should become much more obvious. They’re usually opposites!

For Example: Opposing Luke’s truth (faith in the Force) is his inner struggle, a lack of faith in himself. From the very beginning of A New Hope, Luke views himself as just a farm boy, holding himself back because of his low expectations of himself. By trusting the Force, he discovers a power within himself that reshapes his view of his own potential.

Ask Yourself: “What is my character’s inner struggle, and what will they learn to overcome it?”

Your protagonist’s truth is the key to them overcoming the conflict of your story.

For instance, your protagonist may need to rally a band of old friends to defeat the antagonist. If they’ve been alienating their friends throughout the story because of their selfishness, it stands to reason that their truth is selflessness. This truth will allow them to make amends, gather their army, and emerge victorious.

Importantly, think about what will make your protagonist stand apart. Why are they able to defeat the antagonist? Usually, it’s because of their truth. While everyone around them continues to ignore this truth, they alone embrace it. While this isn’t true for every story, it’s a good thing to think about to ensure your protagonist’s victory feels uniquely theirs.

For Example: Luke only overcomes the conflict of A New Hope by blowing up the Death Star, but that’s no easy task. To do so, Luke has to trust in the Force (his truth). Without that faith he would have made the same mistake as the other pilots and missed his only shot at success. In fact, Luke was the only one who could have defeated the Death Star, because he was the only pilot with a connection to the Force.

Ask Yourself: “What will my protagonist need to overcome the conflict of my story?”

Finally, say you have a pretty fleshed out story to work with. You have a fully realized plot, and a large cast of fleshed out characters. Yet, your protagonist’s truth still stumps you.

In that case, you can look to your other cast members for insight.

The best written stories have a truth that’s reinforced by ever cast member, making it a continuous element of the entire journey. Many writers do this unconsciously, so you may find your secondary cast (including your antagonist) has truths that relate to the truth of your protagonist.

For Example: Luke isn’t the only character in A New Hope who deals with faith. Han Solo’s arc is mostly about overcoming his selfishness, but his major turning point comes when he learns to have faith in the rebel effort, giving him the impetus he needs to return and save Luke. Similarly, Leia and Obi-wan both act as examples of faith, guiding Luke closer to his truth. And finally, Darth Vader stands as the opposite of Luke’s faith in the Force, trying to prove the Force’s weakness and draw the world closer to the Dark Side.

Ask Yourself: “What are the various characters of my story struggling with?”

Put Your Character’s Truth to Use

I hope that by now you have a better idea of your own protagonist’s truth, and hopefully the truths of your other characters as well!

After all, the truth your protagonist learns throughout their journey will be the lesson your readers remember long after they put your novel down. It’s through these lessons that reading becomes such a formative pastime—as the characters on the page learn and grow, we learn and grow alongside them.

If you want to have that kind of deep, lasting effect on your reader, you simply can’t neglect your character’s truth!

What’s your protagonist’s truth? Let me know in the comments!