The 5 Signs of a Compelling Protagonist

When you think of a story, its protagonist is likely the first thing you remember…

From Odysseus or Frodo, to Elizabeth Bennet or the Doctor, protagonists define the stories they come from. Let me ask you—what would Star Wars be without Luke Skywalker, or Iron Man without Tony Stark? A compelling protagonist is not only the focal point of their story, but often the driving force behind its success. They’re more than just a pretty face.

Unfortunately, writers thrive on creating characters, and tend to love their characters just as much—which raises a problem for any diligent author. How do you know which of your characters deserves the mantle of “protagonist”?

The Struggle to Choose a Protagonist 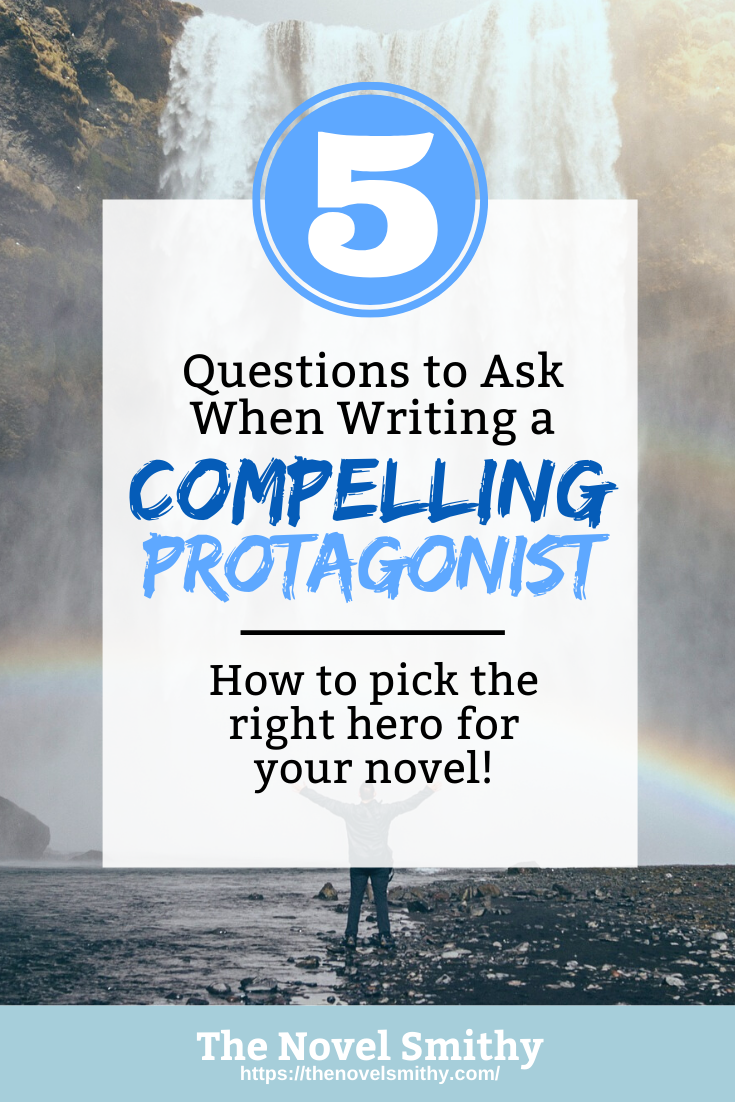 Every writer has a cast of interesting characters they would love to delve further into, and I’m sure you feel the same way. After all, you love your cast, from the minor sidekicks to your most terrifying villains. However, when it comes time to choose a protagonist, this can make your job complicated.

Sometimes it’s easy to know which character stands out the most—in a story about the personal journey of one character, it seems clear they’ll be your protagonist. Yet, even in that situation, why is their personal story the one worthy of being told?

All of this leads to a single question…

At the end of your outlining process, how do you know you aren’t making a horrible choice? How do you know that you won’t get 200+ pages into writing your novel only to find your hero’s sidekick would have been a much better protagonist from the start?

Well, there is a way to ease these fears. As you work on creating your cast, look for these five key characteristics that’ll guide you to your protagonist. Best of all, now you can be confident that the character you choose will be one you’ll still think deserves that special title when you reach the final pages of your story. 🙂

The 5 Signs of a Compelling Protagonist

One of the first—and most obvious—signs of a good protagonist is that they’re your story’s focal point.

However, this might not mean what you think it does.

At first glance, you may think being “your focus” makes your protagonist the main character of your novel and, while that’s usually true, the real answer is a bit more complex. You see, despite common belief, your protagonist doesn’t have to be the hero or even the main character of your novel. Sometimes, your story won’t even be told from their point of view.

Instead, being the focal point means that your protagonist is the primary catalyst creating change in your story, thereby advancing your plot. Likewise, they should be who you want your audience to identify with. As an example, think of The Great Gatsby—would you say Nick is the protagonist, or Gatsby himself?

If you said Gatsby, you’re right! Gatsby is clearly the catalyst, changing not only the course of the story but also the lives of all the surrounding characters. The audience’s focus is on Gatsby, and their primary concern is with the outcome of his journey. While Nick has a role to play in the story, he’s not the protagonist, even though he’s the point of view character.

They Resolve Your Conflict:

The second sign of compelling protagonist comes from their role in resolving the conflict of your story.

To be your protagonist, they must be the one to resolve your story’s plot.

Importantly, this goes beyond marking your character as the chosen one through prophecies and special symbols, and even beyond bestowing them with special powers. Instead, a good protagonist is one whose unique qualities as a person—gained through their growth over the course of their story—make them the best equipped to resolve the Climax.

For example, Katniss Everdeen fulfills her role as the protagonist of The Hunger Games because of her intelligence and strong spirit. Additionally—in those pivotal moment at the end of the games—she’s the only character who would sacrifice her own life to deny the Capitol a winner.

While your protagonist may be just an ordinary person, their particular personality, qualities, and experiences should set them up to resolve the conflict of your story in their own unique way. Essentially, they must be the deciding factor in your novel’s finale, or they aren’t your protagonist!

Their Arc Shapes Your Conflict:

Related to the previous sign, a good protagonist’s character arc will be the most in-depth and relevant arc throughout your novel. This is because their arc should be driven by the conflict of your story, and their ability to resolve that conflict will hinge on their growth as a character. Often, that growth will also affect the character arcs of those around them.

Oskar’s entire arc is based on his growth from greedy and self-serving, to self-less. By the end of the movie, he’s is willing to sacrifice not only his fortune, but his own safety to help the Jews he employs. His character arc is profoundly affected by the conflict of the story—the execution of the Jews—but this arc is also what allows him to resolve that conflict.

This should also be true of your protagonist.

Of course, to fully understand this aspect of your protagonist you’ll need a solid understanding of how character arcs work to begin with. There are far too many details to cover here, so check out these posts on positive versus negative character arcs and flat arcs for a more in-depth explanation.

They Symbolize Your Theme:

For our fourth sign of a good protagonist, we’re looking at theme.

Specifically, your protagonist should embody the themes of your story.

While at times esoteric, at its most basic the theme of your story is the lesson, moral, or question you want to ask your readers. Whether that’s the value of courage, trust, or something more complex like the meaning of a good life is ultimately up to you. Regardless of what your theme is, your protagonist will be key in communicating that theme to your readers through their character arc and their behavior—though they can act as a cautionary tale, of course.

For example, a story about humility is well-served by a protagonist who starts out head-strong and aggressive, such as in Thor.

Thor begins his first movie a self-important prince, believing he deserves the throne and the power that comes with it simply due to his birthright. Through the trials and challenges he faces, he learns to put others before himself and be gracious with the power he’s been blessed with, finally earning his title. Thus, he perfectly embodies the themes of humility put forth by the movie.

Lastly, we come to perhaps the most important sign of a good protagonist.

They need to excite and interest you, the author.

Though this may seem obvious, for many writers it’s easy to get caught up in your first idea, committing to a character that isn’t your true favorite simply because you planned for them to be your protagonist from the beginning.

The problem is, you need a protagonist you feel driven to write about. They should pique your curiosity, and you should love to talking about and exploring their journey. If this isn’t the case, then no matter how perfect they may be in other ways, you’ll likely regret making them your protagonist—and that’s exactly what you want to avoid!

So, as you’re considering who your protagonist should be, pick one that you feel passionate about. Better yet, pick one you would happily write an entire series for! They need to be meaningful to you. If they match none of the signs we’ve discussed, that may mean it’s time to change the story they’re in—it doesn’t necessarily mean you need to give up on them as your protagonist all together!

Questions to Ask When Choosing a Protagonist

Based on the five signs of a compelling protagonist we’ve discussed, here are five questions you can ask yourself when choosing your protagonist:

Look over your cast of characters and consider each of these questions. While some characters may fulfill two or even three of these requirements, you should eventually land on one that embodies all of these traits.

That is your protagonist!

What About a Story with Multiple Protagonists?

When it comes to choosing a protagonist, you might start to wonder—what if I want to write about multiple protagonists? Is that even possible, especially considering all of the requirements above? Well, while these five qualities are difficult to fulfill when dealing with multiple protagonists, it’s by no means impossible!

To help explain this, let’s examine V for Vendetta, which has three equally strong protagonists:

How does the movie handle this? Well, to start, the story focuses on the three separate—though intertwined—experiences of these characters as they navigate life in a totalitarian UK.

Each character comes from a unique perspective. Evey is an average person suspicious of the government’s narrative, V is a known terrorist working to overthrow the regime, and Finch is the government’s Minister of Investigations. As you might imagine, each has a very different understanding of the world they live in!

From there, the story follows them as they slowly bring down the totalitarian government in their own ways, eventually coming to the same conclusion through different experiences.

It’s this shared conclusion that ties these three together as protagonists:

That’s what makes this movie work—it isn’t splitting its time among two side characters and a single protagonist, but rather dividing the movie among three, equally qualified protagonists. Best of all, you can achieve the same in your own novel. While it will be difficult, so long as you ensure that all of your novel’s protagonists fulfill their role fully, multiple protagonists can be done to tremendous success!

It’s All About Your Characters!

Ultimately, when it comes to choosing a protagonist, you need to trust your gut, even as you work to apply the five lessons you’ve learned here. After all, sometimes it’s your story that needs to be tweaked, rather than the protagonist you’ve chosen. So, if you have your heart set on a certain character being your protagonist, don’t despair!

Of course, writing quality characters is about more than just choosing a protagonist.

You’ll need to consider things like character arcs, backstories, and descriptions. If you’re itching to learn more about character creation, check out The Character Creation Workbook! This free downloadable ebook will walk you through everything you need to start writing amazing characters.

Who is your story’s protagonist? Let me know in the comments!

Thoughts on The 5 Signs of a Compelling Protagonist