Writing a Trilogy: How to Plan a Series of Novels - The Novel Smithy
Skip to Sidebar

Writing a Trilogy: How to Plan a Series of Novels

A book series is a powerful writing tool, because it allows you to take your reader on a journey. Your trilogy can grow alongside them, and you have far more space to explore your characters, worlds, and themes than you would in a single novel. Trilogies in particular have a unique kind of resonance.

However, the challenges of writing a series are proportional to the benefits. While you only have to worry about one storyline in a single novel, in a trilogy you need to keep track of three—alongside the overarching story that guides your whole series.

The Challenges of Writing a Trilogy

Almost every author will think about writing a trilogy at least once (if they haven’t bitten the bullet and published a series already).

Still, that doesn’t mean writing a series is easy.

While I’d argue creating a successful trilogy isn’t significantly more difficult than planning a single story, it definitely comes with its own unique challenges. Fortunately, outlining your trilogy can solve many of these.

You see, when writing a single novel, you only need to consider one story and one set of character arcs. This means you should have a single outline with a clear story structure running throughout. As long as you have that, you’re good to go.

A series of novels is a whole other beast.

You’ll need to consider everything you would for a standalone novel (story structure, plot lines, character arcs, et cetera…) multiplied by however many books are in the series. That may not seem too bad on the surface, but the real complicating factor is your series’ overarching storyline.

However, this doesn’t stop there. You also need to consider the story structure and character arcs that run throughout that overarching storyline. For instance, in Episodes IV through VI of Star Wars, Han Solo transforms from a selfish, independent rouge to a hero of the rebellion.

That doesn’t all happen in one movie, of course:

The Original Star Wars Trilogy: Han Solo’s overarching character arc sees him transform from a selfish, independent rouge to a hero of the rebellion.

A New Hope: Han Solo starts out only willing to help for money, before returning at the last minute to save his new friends. However, he isn’t sold on the promises of the rebellion just yet.

The Empire Strikes Back: Han is becoming more involved with the rebellion, Luke, and Leia, though he continues to claim he’s working only for his own benefit. This shifts when he protects Luke and Leia on Cloud City, giving up his own chances to escape.

Return of the Jedi: Han finally completes his arc, embracing his role in the rebellion and leading the rebel forces on Endor.

Notice how each film has a small arc of its own that feeds into Han’s larger character arc for the whole trilogy. This same principle applies to every other element of the Star Wars prequels as well—including Luke’s character arc and the overall plot.

Of course, not all series are built the same.

This article focuses on how to plan a trilogy of novels, though many of these principles will work just as well for duologies, quintets, or however many books you plan to write. The real distinction you need to make is between these types of series and serialized fiction.

Sherlock Holmes and the Nancy Drew series are both great examples of serialized fiction. Each book stands on its own, following a common protagonist and cast of characters as they solve a mystery. The basic premise is always the same, but there’s little by way of an overarching story.

For serialized fiction like this, you can approach each book the same way you’d approach a standalone novel. Outline it as you normally would, while making sure the characterization of your cast is kept the same across the series.

Trilogies are where things get more complicated, as we saw above with Star Wars.

This complexity is ultimately what makes planning and outlining your trilogy so important for the success of your series. You don’t want your books to feel disconnected, but you especially don’t want to write yourself into a corner come book three.

How to Outline a Trilogy (or Series) of Novels

When you’re first getting started, outlining a trilogy is no different from outlining any other book—which makes things much easier!

As with any outline you create, you’ll want to start by brainstorming ways to further develop your ideas and expand on your story, before moving on to create scenes and characters. From there you’ll organize your scenes into a chronological timeline, and flesh out your characters with fully formed character arcs.

At this stage, the key is to approach your outline as if you were planning a standalone novel; basically, as if your trilogy was just one, gigantic book. While you’ll be splitting your scenes into three separate books later on, the overall premise and timeline you develop here will be the foundation of your final trilogy.

Of course, outlining a single novel can be complicated in its own right.

I’ve written up a detailed, ten-step process for outlining your novel that I encourage you to check out before moving on. If you’re following along with that guide, you’ll want to return here once you reach step #7: Incorporating Story Structure.

With a rough timeline and a cast of characters created, you can shift focus to your trilogy’s overarching storyline. Again, you want to think of your trilogy as a single book for now.

Your goal at this stage is to incorporate story structure into the scenes you created previously. This will form the plot of your trilogy as a whole, and will give each book the feeling of being connected and meaningful to the larger series. After all, structure is such a vital part of storytelling because it gives your reader a sense of progress and leaves the events of your story with lasting consequences.

While there are many story structures out there you could use, I strongly recommend The Three Act Structure, especially if you’re writing a trilogy. You see, the plot points of The Three Act Structure line up perfectly with the three books in a trilogy of novels, giving each book a distinct mood and role in the overarching storyline. Plus it’s simply easier to manage, since they both line up so well! 🙂

This means you’ll want to include these six plot points in your overarching storyline:

Once you have a solid outline of your overarching storyline’s structure, you can finally shift focus to your individual novels

Planning Each Novel in Your Trilogy:

With a strong storyline in hand, you can begin splitting your outline into individual novels.

Your six plot points should be easy to divide across your trilogy:

First Book: Starts with the Hook, ends with the First Plot Point.

Third Book: Ends with the Climax and Resolution.

Of course, these may not line up 100%, but as a general rule, this is how most trilogies are formed. Other types of series will be split differently, but this setup can still serve as a rough guideline, especially for six or nine book series. Duologies are also easy to split, with book one ending after the Midpoint.

Regardless of the type of series you’re writing, now that you have a clear idea of where your books will begin and end you can turn to the more difficult task of outlining each individual book. This is essentially the same process you completed for your overarching storyline, but with some added complexity. 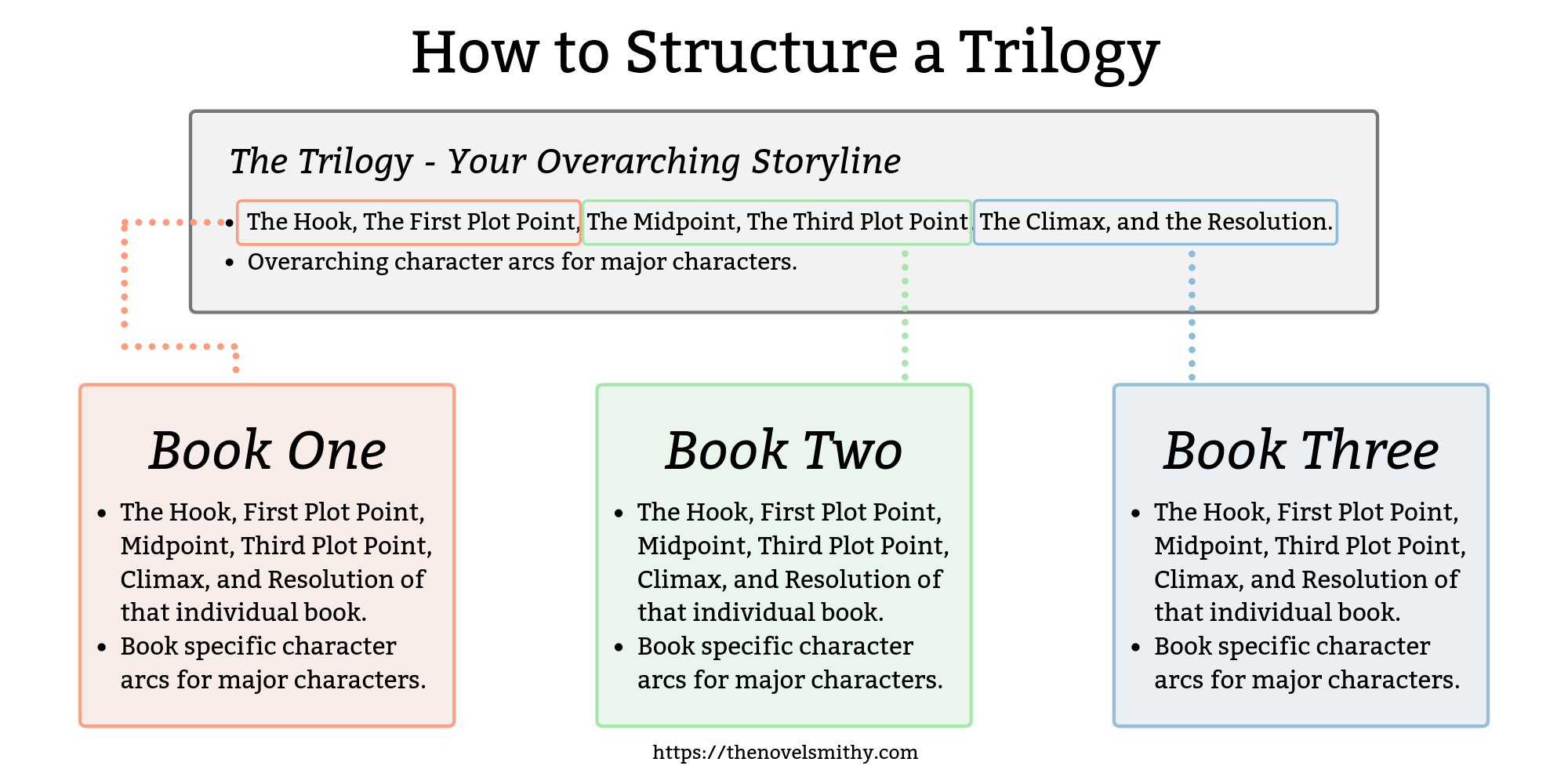 To start, you’ll need to incorporate The Three Act Structure into each novel in your series. Consider the main conflict of that individual book as well, along with any book specific character arcs that don’t span across the series. Outline those just like you did for the overarching story, but separate them into their own outlines.

This goes for any overarching character arcs as well.

Thinking back to Han Solo, while his arc played out over all three movies, he still underwent a significant change in each film. Any character whose arc stretches across the series should have both an overarching arc, alongside smaller book specific arcs that feed into their main journey.

Staying Ahead of Your Story:

Finally, with an overarching storyline and a rough outline for each book, you can relax.

This final step is largely up to your personal style, but here’s my recommendation: outline as much as you can for your series before you ever start writing book one. I’d even go so far as to complete the entire ten step outlining process for each individual book before tackling your first draft.

While this seems like a lot of upfront work, the payoff can be huge. After all, the events of later books need to be set up and prepared for in book one. The worst feeling is when you’ve already published books one and two, only to realize you need to make a major change in book three that you forgot to write in.

My Experience Writing My Own Trilogy

I recently had to confront this for my own trilogy of novels, The Sunrise Council.

You see, I had already outlined books one and two, and was considering starting on the first draft for book one right then. I was excited to write and felt good about my outline thanks to the ten day process I developed in The Ten Day Outline. I even had a rough idea of how book three would end thanks to the process above.

However, I stopped myself and outlined book three like I knew I should and, in the end, I had to change a major aspect of book one to prepare for the Climax of book three.

If I had already started writing, I would be in a major bind when I realized my mistake!

Ultimately, whether you’re outlining a standalone novel or a series of novels, having an outline makes the whole writing process faster, easier, and much less stressful. I hope you’ll give this outlining method a shot if you’re planning to write a trilogy, and definitely try out the ten step outline I developed here too!

I’m confident both will serve you well. 🙂

Are you planning to write a trilogy? Let me know in the comments!

Thoughts on Writing a Trilogy: How to Plan a Series of Novels